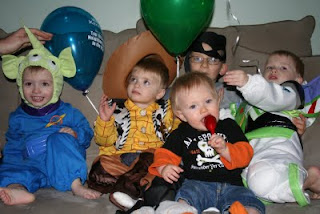 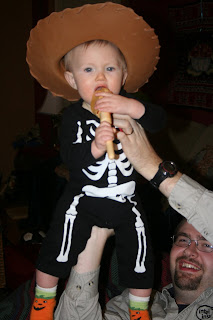 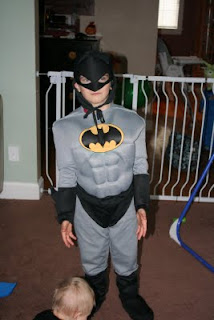 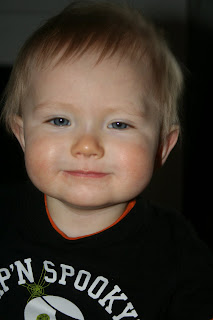 I couldn't resist! Griffin is the happiest baby EVER! 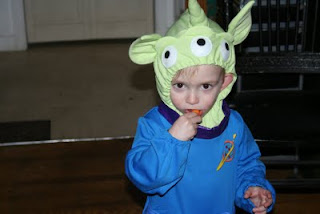 Emerson as the Alien from Toy Story! 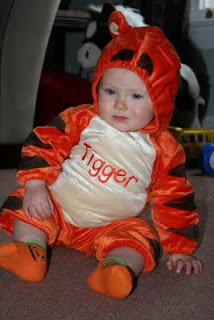 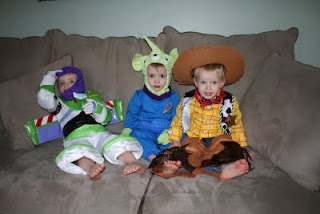 Alex as Buzz, Em as the Alien and Max as Woody! The dry run before Halloween.

Well, God is good! We are healed! That was the longest two weeks of my life. We are ALL feeling better. The swine flu has officially left our system and are finally returning to our normal routine. The kids came through like champs and just in time for Halloween.

As I've said before, we don't do the traditional Halloween celebrations. We omit all the death, terror and ghoulish parts. Instead, we carve happy pumpkins, dress in positive costumes, occasionally go door to door(to our immediate neighbors and only people we know) and use the opportunity to go see family. Unfortunately this year Halloween was freezing. Not only that we had 40 mile an hour winds. At one point I think I saw Dorothy from The Wizard of Oz fly bye...Auntie Em, Auntie Em!!!!!!!!! We had to rearrange our plans a bit but we had a great time. We took the kids to the Kenmore Halloween party. This was a little difficult because of the weather but we got them balloons and snacks all while walking around admiring all the costumes. Aside from some vampires the costumes where fairies, monkeys, super hero's and the occasional spider. I didn't see too many that where really scary! We headed home after only a short time because the wind kicked up. Later that evening we dressed the boys up...Emerson as an Alien, Maxim as Buzz and Alex as Woody from the Toy Story Movies. Griffin was Tigger and Austin donned his best Batman! They all looked so cute. We had done a "dry run" a few days before to make sure the boys would tolerate being in a costume. Aside from 1 minor mishap(Maxim would not keep the cowboy hat on for the Woody costume)it went off without a hitch. At my mom's house the boys got visits from their Aunts, cousins as well as their Papa and his wife Robin. It was nice to see everyone and the kids where nice and toastie instead of freezing and blowing down the street! It was another successful Stinner holiday, now bring on the turkey!!!! Thanksgiving is right around the corner!
Posted by Stinner at 10:50 PM