Let's talk about sex...or not!

So now that I got your attention...let's do it, let's talk about sex.

Austin is turning 10 in a few weeks and I've noticed some changes in him. Aside from growing like a weed, his voice is changing and he has *outbursts* that can only be described as testosterone fueled explosions. Don't accuse him of something he didn't do, it will lead to a world class melt down.

I know what's happening, he is starting puberty. I really expected to not have this conversation until he was 12 or so but, it happened! We were in the car, just him and I (He was home sick and had to go with me to pick up Grif). He said "Mom, what does Explicit mean when it comes before a movie? Like "Explicit Behavior"? "Or Crude, what does Crude behavior mean?". I said it could mean a variety of things but in the instance he was questioning it meant words that are sexual in nature or have sexual meaning. Then...it HAPPENED! "Austin, do you know what SEX is?"...I don't know what I was thinking, it just flew out of my mouth. Then it was there, just hanging in the air. I had no choice to explain when a little embarrassed voice squealed from the back seat..."MOOOOOOOOOOOOOOOOOOOOOOOOOOM"..."Well, do you?"...."No not really.".

I began by asking if he knew where babies came from. He said "Your belly.". "OK, but how do the babies get in there?". "God?"..."Good answer but not exactly."...I explained gently and using accurate words how a man and a woman procreate. Since I wasn't looking directly at him I'm not exactly sure what his reaction was but I was met with silence. I went on and on for about 10 minutes describing in what I thought was an age appropriate manner about how babies are made, still...silence.

I was feeling quite proud of myself by the time I had finished. It went better than I had thought. He sat and quietly listened to me as I went on and on. I had his full and undivided attention. When we reached Griffin's school I turned to him and said "Now do you have any questions?"...Then I saw it...his face was red as a beet but flushed at the same time. I thought for sure he was going to puke all over the car. I said "Austin, are you ok?". He said..."Mom, can we NOT talk about this anymore?"..."Uhhhhh, OK.".

Well, I guess I layed the foundation and David will have to do the explaining down the road. I can't wait to hear how that goes!
Posted by Stinner at 10:26 AM No comments:

The Stinner Clan has been devistated by THE PLAUGE this week. It started with a runny nose or two followed by grumpy, whiney attitude then a full blown cough *hack *hack, sneeze, GAG! One kid home Monday, Two kids home Tuesday, ALL kids home Wednesday, The Momma sick on Thursday and two kids home on Friday.

Just when I think all is well, I hear..."MOMMMMMMMMMMMY, my froat hurts"! Thank God for the flu shot! After the H1N1 incident of 2009 I will never go without again! 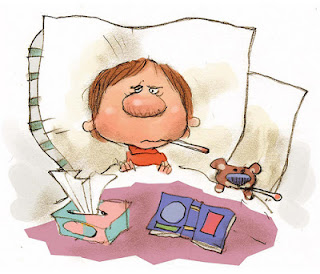 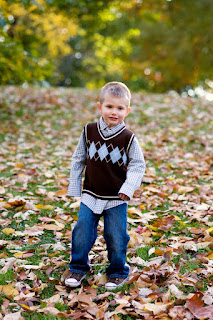 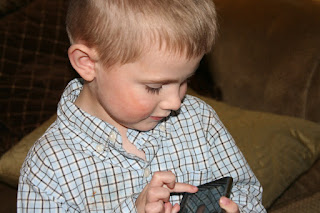 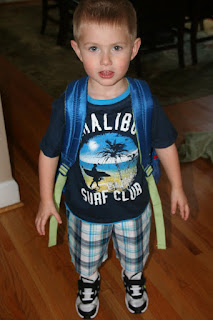 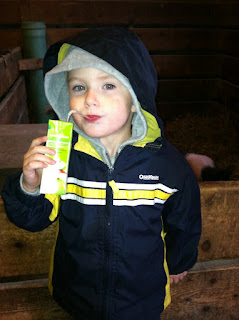 Where has the time gone? I know he is no longer a baby but he is MY BABY and always will be. He is as big as his older brothers and as active. He may be "Different" by everyones standards but not by mine. He is smart, funny, brave, and he is the ONLY child that doesn't talk back!

Every year I write my children a love letter on their birthday...

4 years have flown by! Just yesterday you were this tiny little baby, bouncing his little feet off. Now you are a big boy who loves music and school.

You have the sweetest face. You may not say much but your expressions tell me all I need to know. I love that you call me "Bobby" instead of Mommy. It is something that is all your own. You look at me and say "I lub youuuuuuuuuuuuuuuuuuu", that makes any bad mood just melt away. You make yourself laugh and can amuze yourself for hours on end with your iPod. No matter how many times we erase your "history" on your device you can always find the same videos and watch them over and over. You can say ALL your ABC's and count to 20. You are an outdoor baby! You prefer to be outside playing and LOVE the playground at school.

You love to sing! Who said a non-verbal child can't carry a tune never met you. Right now you love the vocal stylings of Bruno Mars and Telly Monster from Sesame street. Your tastes are quite electic! Your not a BIG sleeper. You prefer to hang out with Mommy and Daddy after your brothers go to sleep. Snuggling on the couch is my favorite pastime by far.

You are a joy to take places. As long as you have your iPod we can go anywhere. People sometimes stop and stare but you don't seem to mind. You are just absolute perfection to me. Everyday you make me proud to be your mother. I know you will be a great man, I'm your mother and I know these things. I love you more than you will ever know!

Mommy
Posted by Stinner at 11:07 AM No comments: 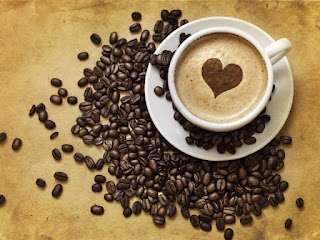 ...and off they go! I know, I should be "boo-hoo'ing" in my coffee that the kids are back at school, but i'm not. The first few days of vacation are heavenly. The boys play, watch movies, talk about Santa and their expectations and then it ALL CHANGES!

Within hours of opening their Christmas gifts, the mood alters. "He touched me. He stole my toys. He looked at me wrong." So honestly, when the last little butt walks up those stairs on the school bus....HASTA LA VISTA BABY!

Griffin is very happily sitting with his teacher in the living room working on his association skills and I am blogging, sipping hot coffee, and enjoying the Today Show. I won't lie and say I don't miss them. But today I will enjoy the peace and quiet for just a few minutes...eventually...THEY COME HOME! 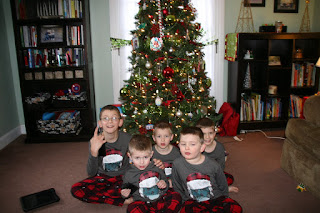 No one is looking :(

Are you ready for my list of New Years Resolutions? Well, I'm not going to. No one wants to hear about all the resolutions I will most likely not keep for very long. I basicly just resolve to be the best possible mother I can be.