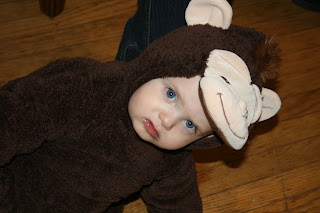 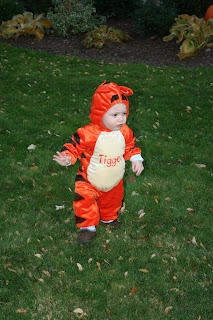 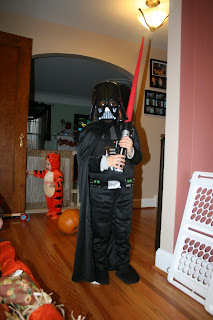 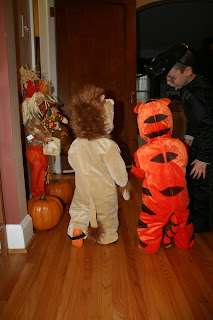 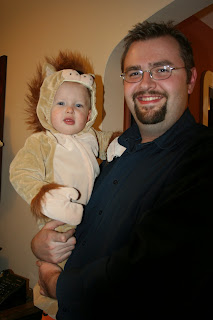 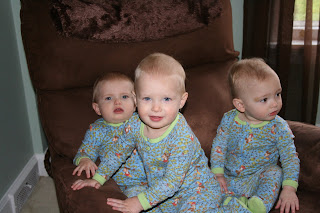 I have pictures of the three of them nesteled on this chair. Now there is no way! They are so Big!

Halloween is what you make of it. You can either go the goring, ghouly, blood and guts route or you can take it as an excuse to dress up, be silly and get treats. The ladder is what we chose. The kids had a blast. David came home early, we dressed the kids in their costumes and than we where off. We don't trick or treat, so along with our outing last week at the Zoo we went to show the boys off to family. We first stopped at Grandma Linda's house. She cracked us up by answering the door dressed as a black widow spider. We had just enough time to say "hi", take some pictures and grab some candy before heading to Grandma and Papa's houses (they live next door to one another). Of course the babies fell asleep in the car and where freaked out when they woke up in a strange place. Especially dressed the way they where. Grandma and her husband as well as Aunt Ella, Papa and Robin where all there to greet the boys. We hung out, handed out candy and played. The boys tried M&M's for the first time and LOVED them. They couldn't get enough. Titi came and played for a while and than the sugar high wore off so it was time to go. The boys slept the entire night...and so did Mommy and Daddy!

We have been trying to ween the boys off formula. This has proven to be more difficult than I had thought. Because Max and Emerson have reflux it has been a series of what milk can they digest and how does it react with the reflux. We have had some screaming fits, puking and sleepless nights trying to find the right combination. We where hoping all the boys would be either on Soy milk or whole milk but that's not exactly what happened. Now we have all the boys on half their amount of formula and Alex and Emerson are on half soy and Max is on half whole milk! I guess nothing is easy when you have triplets!

Austin is doing amazing in school. After talking to his teacher last week he seems so confident. He is reading better and his writing is improving immensely! We are so proud of him. Even his behavior is improving.

Pregnancy Update: Well we are in our third trimester. It looks like we have about 8 weeks left. The baby is extremely active. In fact he often wakes me up in the middle of the night with his kicks! I have the occasional Braxton Hicks contractions, usually at night. I think they happen more when I finally sit down and relax as opposed to when I am busy. Maybe I just feel them because I am sitting idle. I feel like I am huge. The doctor estimates he weighs around 3lbs right now. I personally think he is around 23lbs since that's how much weight I've gained! That's my story and I'm sticking to it!
Posted by Stinner at 12:24 PM