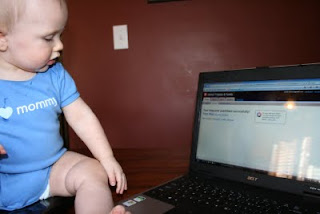 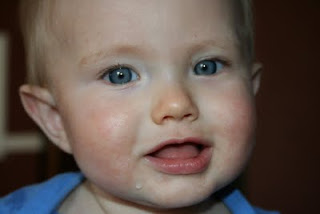 Does he look like a baby recovering from surgery? 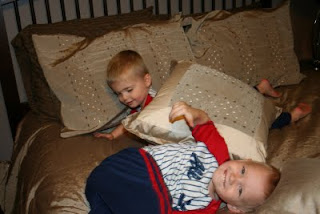 "we didn't just escape from our beds, mom...we swear!" 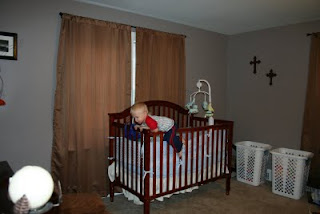 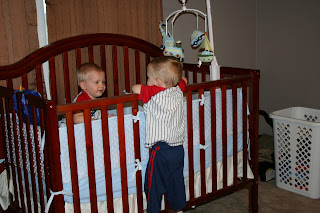 Maxim and Emerson discussing how to get in and out of Griffin's crib. 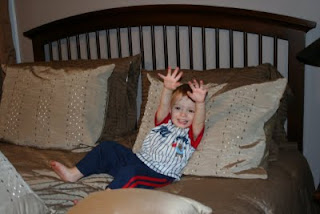 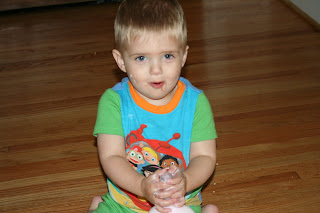 Alex after getting busted playing with the baby cream!

We all knew this day was coming, but who knew it would be like a light switch when the boys turned 2. This last week was, well, ADVENTUROUS! I could be really specific and say on Friday afternoon 12:17pm, shortly after putting the triplets down for their nap, I heard a {{{THUNK}}}. David just so happened to be home for lunch. I asked him to go upstairs and check on the boys to make sure they weren't throwing things and that they where sleeping. Sometimes they will throw their bottle when they are done. Much to David's surprise, when he opened the door...Emerson and Alex came running out. Upon investigation into their room, he discovered their beds where intact. The only explanation is they had gone up and over. We put them back in and went back down stairs. Only to immediately hear the same familiar {{{THUNK}}}. This time I went up, put them back in and stood behind the almost closed door to evaluate the situation. Within seconds these two amazingly creative little boys stacked their blankets on the bumper pad and VIOLA...up and over. It was all like a graceful ballet. Very elegant. No flopping, just a soft transition from standing to an almost pole vaulting move that propelled my barely 2 year olds from captives in their prison barred cribs to absolute FREEDOM! This dance continued through the weekend. Maxim of course joined in eventually and in the mornings we open the door to 3 two year olds running out like Christmas morning. We even removed their "baby paraphernalia" , bumper pads, mobiles etc... from their cribs and replaced them with "big boy" bedding sets to encourage them to stay put. Well, that worked for around 15 minutes than not even Disney's Cars or Buzz Lightyear & Woody from Toy Story could keep them contained. Oh well, it was good while it lasted.

Last night was a little different. Maxim went down like normal, Alex too. Sleeping within minutes. However, Emerson decided he wasn't having it. He jumped out of his crib and immediately climbed Alex's and jumped in with him. Alex let out a {{YELP}} so I came running. I put everyone back in their respective beds than just 5 minutes later I hear another {{YELP}} this time followed by screaming. When I opened the door a sleepy eyed Alex was trying to get out of his crib while Emerson was laying on Alex's pillow, bottle in mouth and looking awful sleepy. My poor baby Alex had a visitor, an unwanted visitor. I put Emerson back and took Alex down with me. All seemed quiet for a while so David was sent upstairs to return Alex to bed. Within a minute David came downstairs laughing. He said he tried to open the triplets door only to meet with resistance. Apparently Emerson gained freedom again. Only to fall asleep on the floor behind the door. Toddler beds, here we come! It's a little sad. The end of a chapter, my babies are all grown up. 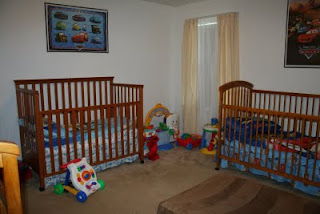 Side rails down and new bedding for my big boys!

Speaking of babies. On Monday, my littlest love Griffin underwent surgery. It was to correct a minor birth defect. The procedure turned out to be a little more severe than the doctor had originally hoped but my baby came through great. He is a fighter! He is sore but we keep praying he will heal fast. Little boys are resilient. It is a little hard to take care of the three escape artists and him but my exceptional Nanny, Deb is helping out. Keep him and us in your prayers please.

The summer is coming to an end and Austin is getting to head back to school, Thank God! I know the poor kid is bored. We have had some really awful weather lately and he has been confined to the house. We do have our "mommy" days. That we go out and do fun stuff but those are sometimes replaced with doctors appointments or school shopping. He is looking so forward to school and so am I. He had a wonderful summer and I am proud of my big boy who has really grown up. He is a joy, when he listens. We have our moments but I couldn't ask for a better son.
Posted by Stinner at 8:34 AM