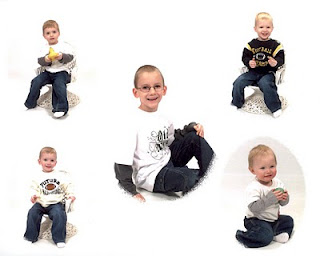 This is the professional picture we had made for our family for Christmas. I had to wait until the last Christmas gift was given before I could post it. I am not a fan of the picture. I think it looks like I have floating children. If my kids weren't so darn cute, the day would have been a complete wash!

Day 9 after surgery and Austin is doing well. He says he is ready to return too school but in my opinion he is not eating well and is still on antibiotics. I told him maybe Wednesday if he is eating better. I think 10 days isn't long to be off from school after surgery. I'm just worried about him relapsing when his birthday is just a few days away. When I told him we would reevaluate on Tuesday he said "OK, that's why your the mom". I knew I raised him well!

I myself had surgery on Wednesday to alleviate the pain from the varicose veins the kids caused during pregnancy! Damn kids! It was actually rather painless but has proven to get a little sore as the days go on. Probably because I can't take more than 3 minutes of sitting down without stressing about what I need to do next.

The little boys are doing great. In fact they are doing amazing! I am proud to say that Alex has begun potty training. Yesterday he peed on the potty 3 times. We had a parade and sang the "we're so proud of you" song. He even got an Elmo sticker that said "Hurray"! He was so proud of himself that he keep saying..."I DID IT"!!! I think he will be ready for preschool in September. Yes, I will send him by himself if he is ready. We don't think it will harm them by being separated. In fact, we think it may motivate the other two to step it up.

Emerson is Mr. Independant. He likes to do things his own way. Don't get in his way or...you're in trouble! He sits and plays Lego's for hours. He makes huge skyscrapers than transports them onto wheels. I personally think he's a visionary, it's the wave of the future...you just watch! Maxim is my little helper. He helps me pick up the toys and he loves to vacuum and his main job is to help me change the sheets and make the beds. He always needs to be right next to me. If it would only last!

Griffin is just my little joy! This kid is such a sweet baby. He is so independant since he started to walk. He just runs all over the place. He is a little rough houser though. He loves to be thrown around and smooched all over his face but watch out, he recently got more teeth and he is not afraid to use them! He's just a little smaller than the triplets and he can definitely hold his own!
Posted by Stinner at 8:58 AM