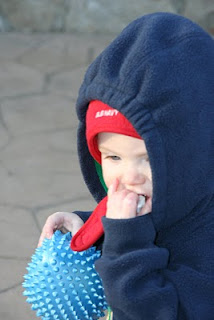 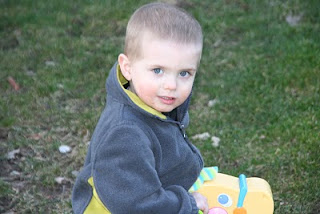 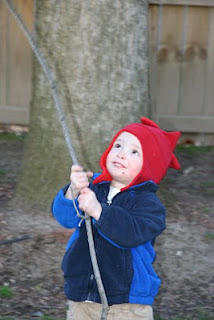 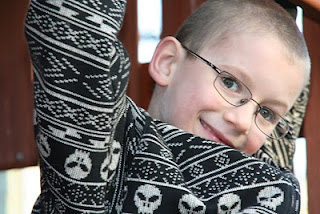 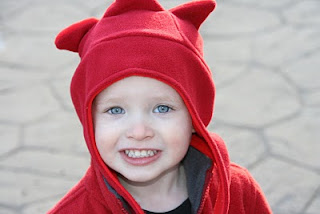 I love when we have a random week of Spring in winter. It's rare here but it happens. Last week was absolutely beautiful. 55-65 degrees for four whole days. The boys LOVED it. We broke out the summer toys and played outside. Quite frankly we needed the break from being in the house. We have been redoing our attic and preparing Austin's new room. It was the perfect time to get some fresh air and allow the kids to just RUN! At first the boys where leery. It was like they forgot what to do outside. They seemed afraid to go on the swings or down the slide. They didn't want to step in the grass. And Alex kept asking me "are you here, mom?". I think he was afraid I was going to leave him outside. He picked up leaves, sticks and I saved him in time from picking up a petrified dog turd! UGH, the Spring clean up is underway!

Like I said the boys where leery at first but within minutes they where running like madmen. I realized they are kids now. Last year they where babies. I was so afraid to let them climb the ladder to the swing set or to play in the tree house but they seem to be so stable on their feet that it no longer mattered. This was great since now Griff is older and is running. He was unsure of the terrain at first. He stood straight as an arrow and refused to move. I realized he very rarely wears shoes and that he probably was afraid to walk. When he first got his memento up, he took off. He ran from one end of the yard to the next. He licked rocks and ate a small tree branch in the process but I just chalked it up as minerals he apparently needed in his diet. He even went down the small slide(with coaxing from mommy, of course). Maxim has NO fear. He climbed up and down the ladder like he has been doing it forever. He wanted to know what every single spec was. Emerson was happy to go in and out of the garage pulling out every toy and bike he could find. Austin is the KING!!!!! He plays with his brothers so well now. He organized them in a game of soccer than they where playing a rousing game of tag that lasted for a long time. He loves playing with them, finally.

I know this wasn't really Spring. It was more of an interlude to Spring. It's fine with me as long as I know it is eventually coming. We need the fresh air and excises really badly. I say, bring it on and bring on summer fun in the sun!
Posted by Stinner at 3:17 PM