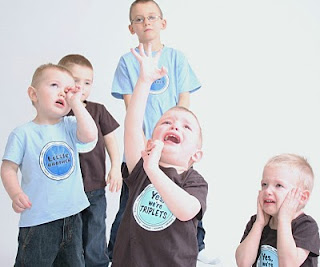 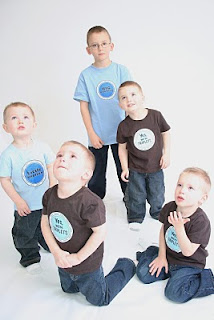 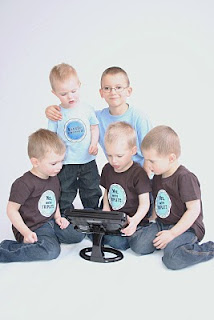 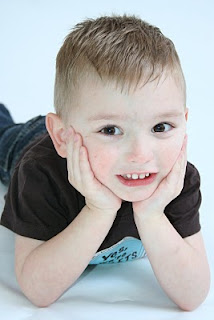 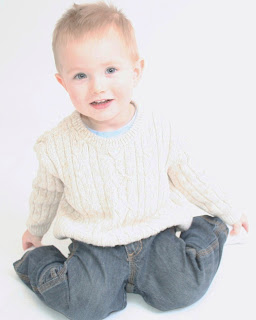 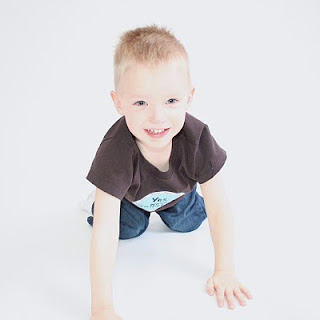 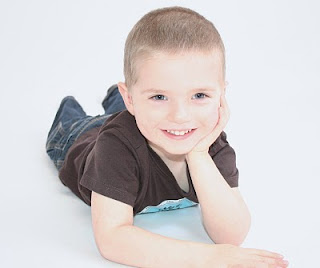 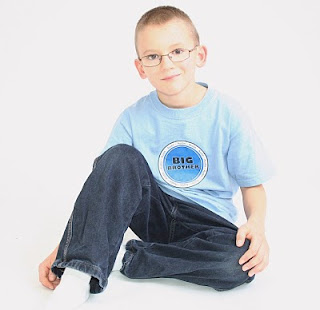 Last year instead of a traditional Christmas card I sent out a newsletter to all our friends and family. Well, it was so well received that I decided to do it again. It also included a picture collage of all the boys 2010 portraits that I took myself. I wish I could brag a little harder on my talent but the portraits are quite hideous. Oh well, they will get better with time....I hope!

Merry Christmas from THE STINNER FAMILY!

This year has been one full of adventure. We took the kids on their very first family vacation this summer. With very little planning, we piled our brood into the ‘ole mini van and headed out on the open road. We traveled to the exotic state of Pennsylvania(hey, they thought it was exotic) where we took the kids to Sesame Place and Six Flags African Safari. Sesame Place is an amusement park for kids 8 and under (perfect for us)based on Sesame Street. I seriously think the kids thought we where on Sesame Street. We ate breakfast with the characters and even saw a “LIVE” version of Elmo’s World, Griffins favorite! We spent 2 days there and 1 day exploring the African Safari where I think most of the animals where looking at us in amazement. I think the one male bear actually tried to high five David! It was a lot of fun. We then headed out to New Jersey to visit the shore. While there we destroyed a series of hotel rooms and ruined the carpets at several restaurants. The 4 little ones got to see the ocean for the first time and Austin collected enough shells to make one of those tacky lamps you see in beach side gift shops. Every door we walked in to people would ask us questions and offer blessings. Surprisingly, New Jersey was full of incredibly nice people, who’d a thunk it?

Austin has grown into quite the Big Brother this year. He can often be found holding seminars in the playroom on Lego’s and Star Wars. He is doing well in school and is reading and writing like a true champ. He recently told David he wanted to work at US itek so he could kick him out and be the boss…what can I say, the boy has dreams! The Triplets are growing up fast. Emerson is the thinker. He can take apart and reassemble a puzzle like nobody’s business. He has incredible fashion sense and can be found wearing a hat, gloves and shoes most days. Maxim or “Computer Max” as we lovingly refer to him has an obsession with electronics. We have to watch him though because he steals cell phones and laptops and searches the web like an expert. He can also program the DVR better then I can. Alexander is a little Austin. He is infatuated with Lego’s and Star Wars. He really loves spending time with his big brother but sits and has these long intense conversations with me on why the world works the way it does…he’s going to question everything! Griffin is perfection! He is a mommy’s boy. He runs around singing the “mama song” all day long. If he can’t see me, he’s calling me. He loves to dance and hop and bounce. We refer to him as “The Collector”. He finds small objects around the house and carries them all in his tiny hands. He can often be found with 6 or 7 items in his little hands. I think he’s afraid his brothers will take his toys…truth be told, they probably will.

As for David and myself, we are great. David is working hard as usual. The last year has thrown us some curve balls but it looks like the economy is rebounding and so are we. I have begun home schooling the 4 little boys. I just didn’t think they where emotionally ready for school or maybe it’s the other way around. Either way I am enjoying the time with them and the classroom we built in the attic is amazing. As I reflect on this year I realized that we have an amazing life with 5 healthy, happy boys who have recently realized they out number us and are beginning to mutiny. So if your reading this…send help!!!!!