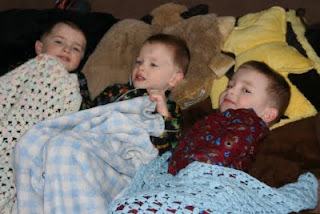 When Austin was 23 months old I explained to him that diapers were no longer an option. He was old enough to have political opinions(he once told the cashier at the Dollar store that his mommy said George Bush was an A-hole)that he was old enough to potty train. Within 24 hours he was completely potty trained. We donated the rest of his diapers to a friend and bought big boy underwear. From that point on he was trained. He never even had a accident.

When the triplets were 18 months old I decided I was going to lay the ground work for early potty training. After all I had 4 kids in diapers and the cost was astronomical. I was going to be SUPER MOM and potty train these guys the same way I did Austin. I sat them side by side in 3 Elmo potty chairs gave them all books to read and waited. I thought as soon as they heard their pee falling into that little red seat and heard their mommy singing the famous "I'm so PROUD of you" song that they would instantly feel joy and self worth and abandon their diapers forever! I wish I could say that, but I can't! Instead 3 18 month old bare assed baby boys went running, screaming and peeing through my entire house. They peed on the curtains, on the carpets and on each other. It was a peefest! I put their diapers back on and decided to wait.

Over the next year I tried several times to get the boys on the potty. It was always the same result. They would run like little mad men peeing everywhere. When they turned 3 I decided enough was enough. I was spending $300 a month on diapers! Every time I changed a diaper I would sit them on the potty. They started to get the hang of it. Maxim would pee, Alex would sometimes pee and Emerson rarely peed but at least he tried. Finally over the winter the potty training stepped up. The boys would remove their diapers and occasionally sit on the potty and go, all by themselves. I was seeing the end in sight!

Here we are almost 2 1/2 years after first starting the potty training process and I am happy to say that Alex is fully potty trained. He only wears big boy underpants and often recruits his brothers for potty breaks. He is a little bit of a Goldie Lox when it comes to pooping though. He has to jump from potty chair to toilet and bathroom to bathroom before finding the potty that suits his poopy needs just right. Emerson will be the next to fully train. He doesn't like to have a wet diaper on his bottom and Maxim has decided to wait for a while(UGH). I have faith that by the end of the summer I will have 3 pooping, peeing perfectly trained pre-schoolers that will constantly scream out ..."MOMMY, I GOTTA PEE!!!!!"
{{{{GRIFFIN, you're next buddy!}}}}
Posted by Stinner at 1:02 PM