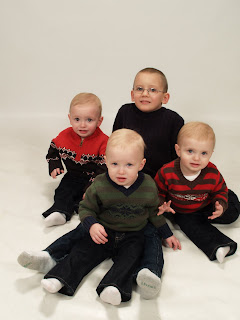 This is as close to perfection as they get! Merry Christmas! 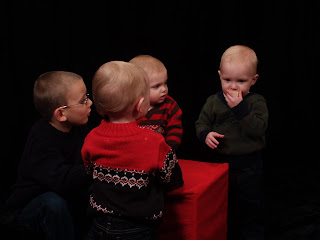 This was so funny, it's like they are saying..."Don't eat that MAX!" 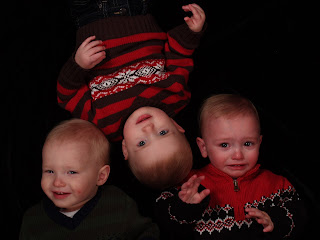 This was another out-take but I loved it!
To Immunize or Not to Immunize, that is the question!
The boys had a good week. Aside from still getting over their first winter cold they have been fairly happy. I took them to the pediatricians office for their 16 month check up. They had their flu shot and seemed to react well. I did however refuse the MMR Titer that is now a requirement at 12 months. I know this is a real big controversial issue. But after doing the research and having a severely Autistic brother both David and myself felt it was in our children's best interest to refuse the immunization until the boys reach school age. Before I get angry emails about how not immunizing my children will lead to an out break of measles, mumps or rubella I just want to say that we did not enter into this decision lightly. Those of you that have met my brother will understand why we decided against the immunization and do to the new statistics that variations of Autism affects 1 out of every 5 boys, I just ask that even skeptics respect our right to do what we feel is best for our children. I watched my brother Christian, who was a normal, active, amazing little baby disappear at 18 months after receiving the MMR vaccination. I have heard this story from so many people. The doctors will not substantiate these claims that it is the vaccinations or rather the preservative in the vaccinations that trigger Autistic qualities in children. but their are no reasons to think they don't. I for one am not willing to take that chance with my sons.
Austin is having some behavioral issues. I'm not sure if it's excitement about Christmas or the fact that the new baby is coming soon. I wish I could crawl inside him and see exactly what's going on. It would be OK if it was just at home but now it seems to also be effecting him at school. I don't want to have to punish him for having a hard time but I'm not sure what else I can do to resolve these issues. I have tried everything. How do you make a 5 year old listen? Is there some miracle cure all or do I just let these issues resolve themselves? I wish I knew.

I took the kids to get their Christmas pictures done this week. What the hell was I thinking? DRAMA! First of all the kids are still fighting their first winter colds and they had these awful runny noses. Than the girl we had...our regular girl was sick...sucked. She was maybe 18 years old with zero experience taking pictures of kids. She didn't even center the pictures. We got a few good ones but in general they where terrible. The good thing was I had called my sister Adrianne to help me and Nanny Deb was with us so the kids where able to run free and be watched at the same time. Never again though! I have started looking into buying a good zoom lens for my good camera and possible a back drop so from now on I will be handling the pictures myself! I have a photography degree, why not use it!
Posted by Stinner at 5:07 PM