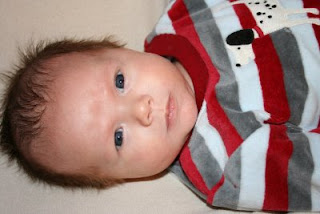 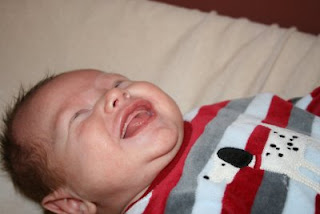 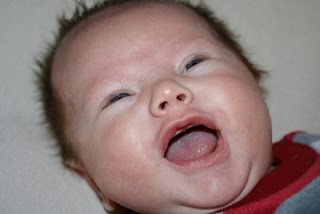 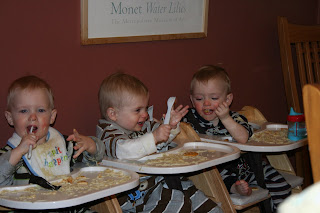 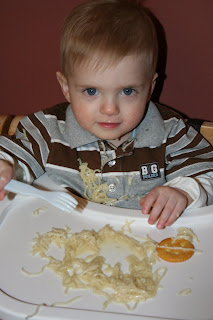 Alex loved the noodles so much, he shared with his shirt! 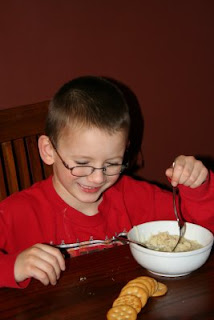 Austin tried to figure out how to eat them! 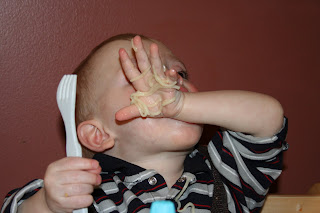 Emerson said "forget the fork" and used his hand! 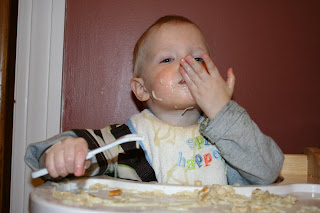 Max had them EVERYWHERE! 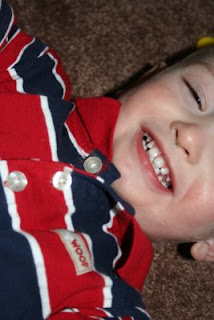 Emerson stole my camera and took this of himself. Maybe he'll be a photographer. 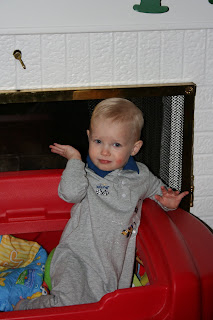 Max apparently trying to convince me he didn't do it! 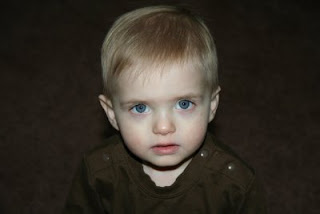 Alex was having an in depth conversation with me prior to this picture.
ALL GROWN UP!
I don't know exactly when it happened but I recently came to the realization that my babies (the triplets) are no longer babies. They are growing so fast. Maybe it's because Griffin is so little...OK, he's not so little he's actually a pretty big baby but I think somewhere in between me having Griffin and now, my 3 little baby boys turned into toddlers. I was looking at them today, they where running around playing tag with Austin and it almost looked like they understood the rules to the game. Max would get tagged by Austin and then he would run up and tag Alex who would run over and push Emerson. Somehow they all ended up in a "baby pile up" as Austin calls it. They where all on top of each other laughing hysterically. Than Alex was saying "get up". Yes, Alex talks. In fact Alex doesn't shut up. He doesn't say your typical "Mama, Dada, Baba, Baby, NO NO". He says "Get down, My baby, I do it, Hiya Griff, AAAAUUUTTIN (no S), Mommy and Daddy" as well as other phrases and words. He's exceptional in his speech. He reminds me of Austin so much at that age. Emerson has learned fear. He doesn't like scary parts to movies and will call me when the scary part is coming so I can hold him on my lap. He sits and plays for hours with his cars and blocks or whatever he can give sound effects to. I love when he makes the car noises..."broooom brooom". He spits everywhere. It's great. Maxim is just huge. He's so long right now that when I hold him his feet touch my shins. He climbs on and in everything and loves all the musical instruments in the house(we have a ton). He will bang on his drum and hum. He hums constantly. I'm not sure where the last 18 months went. One minute they where these little tiny babies and now they're kids. I'm trying not to blink, I think if I do I'll miss something.
Griffin went to the doctor for his 1 month check up. He's 6 weeks old but since he was in the hospital for 10 days he is two weeks delayed on his appointments. He now weighs in at a hefty 11lbs 7.7oz! He is 24 inches long and is measuring in the 90th percentile! That is a far cry from the triplets who at 6 weeks old where only around 6lbs. He lifts his head with ease now and searches the room when he hears my voice. He is beginning to "coo" and he smiles and laughs(with no sound). His face is changing but he still looks so much like David it's unbelievable. I do see myself in his big blue eyes and that just thrills me since I thought he would only resemble David. The doctor gave him a clean bill of health and said he was right on target and even above for his age.
Austin is my little golden child this week. It's almost like night and day. He has been on vacation from school so he started the week with my mom and sister but since Tuesday he's been home with me. What a huge helper he has been. He's been playing with his brothers and helping me with chores around the house. He's even been listening(for the most part). I think he's finally growing out of the terrible 5's! He's maturing and I think he's beginning to understand me more and I am beginning to understand him more. I wish there where more hours in the day though. Sometime he gets shafted when the little ones are demanding of our time. He really is a patient kid. Let's all pray he continues on this path. I know in my heart the hard part is behind us and we are starting a new more positive Stinner chapter.
I have begun to experiment with new foods again. The triplets are starting with new veggies and meats and I am introducing a lot more variety of things in their diet. Well, the other day I looked in the freezer and realized I had very little to work with as far as dinner was concerned so rather than order something I thought soup and a sandwich would be a change for dinner. Shortly after I realized all my bread was frozen so just soup may be fine. I would just give them crackers and fresh fruit for dessert. The only soup I had that would be filling enough for them was Ramen noodles. I was skeptical but gave it a whirl and oh my...it was a hit. Austin loved it and so did the little boys. We'll just say there where noodles everywhere. They laughed and sang during dinner and ate all their noodles. I couldn't help but snap pictures like crazy. The only thing you can't see is that there where even noodles on the walls. I guess my cleaning compulsion is relaxing because I didn't care. I loved that they had fun! That's what life is all about...Family, Fun and FOOD! Can I get an AMEN!!!!
Posted by Stinner at 5:10 PM