Another Week in Paradise! 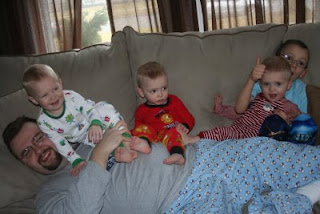 David and his boys! 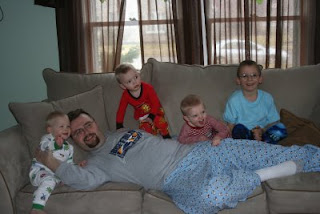 All my men...except for Griffin who was snoozing! Aren't they handsome? 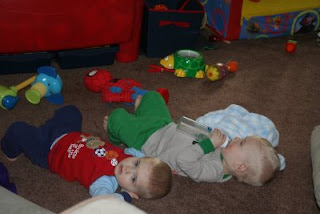 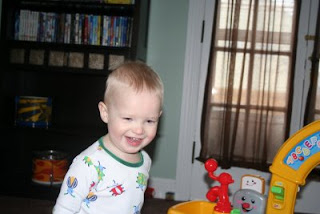 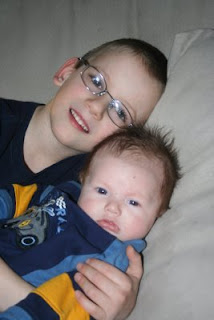 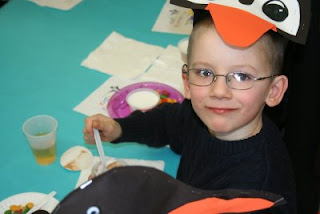 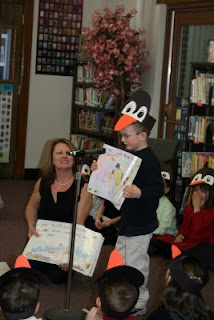 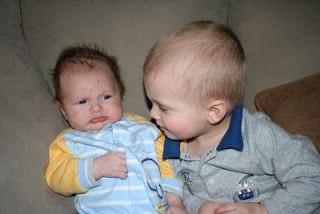 Griffin looks like he's saying "Who the heck are you?" to Alex! 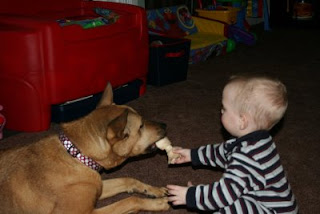 Emerson playing with Sidney. She took a bite than he did...too funny!

Another Week in Paradise!
This week was great! The boys are all healthy still, the snot hasn't returned and the last cough has been coughed! Let's just pray it stays that way. We seemed to have successfully removed the people in our lives who insist on causing us stress so aside from the occassional drive by stalking it's been quiet on that front. All and all our lives are returning to a normal state of hectic ciaos.
Austin had a production, Tuesday at school. It was so cute. All the kids stood up one by one, said their names in the microphone than gave a little fact about penguins. Austin stood right up with no hesitation. He said his name loud and proud and gave his fact. He's a natural! No fear of public speaking on his part. In fact he seemed intensely confident. David and I where both very proud. Afterwards Austin showed us around his classroom, introducing us to his friends and proudly showing off his works of art and projects. He's growing and maturing so fast. Where did my little boy go???? We also got his report card this week and he did amazing. Any issues he had in the beginning of the year are gone. He is reading very well, his writing is improving and his listening skills are much better. On Saturday I took him to the Buffalo Zoo for his friends birthday party. He ran around and played like a wild man. He seemed to really enjoy being with kids his own age. I am hoping to get several play dates for him this summer since all the kids at the party live in our neighborhood.
The triplets had a terrific week. They are really getting into Sesame Street lately. They watch one episode every morning. This is great since I can take that hour and get ready for the day without having to tend to them. They will sit on the floor and watch, intensely. They love Elmo (of course), cookie monster and oscar the grouch. Emerson laughs out loud at them sometimes. I wonder what they are thinking while watching. I love that they are getting into it since it was so helpful to Austin when he was their age. I really owe so much to the Children's Television Workshop and PBS for helping teach Austin the ABC's and to count. I mean I worked with him constantly but they made it fun too learn! I even caught Alex counting as we walked up the stairs...he said "un, two, tree", close enough!
The triplets visited the Robert Warner Center at Children's Hospital today. They go there every 6 months to evaluate their growth. When I say "growth" I mean their physical, mental and cognitive growth. They are all completely age appropriate and above on all testing. No bad for being born 8 weeks early. So many kids, even full term children are just left to heir own accord. Then people wonder why their kids have delays. They evaluated the triplets to make sure they don't have any delays due to their prematurity. Alexander does have an issue with his one leg(it bows out) and he is pigeon toed so he is going to see a physical therapist next week but aside from that they all tested between 16 and 1/2 months(their corrected age) and 20 months. So they are all on target. They should have no long term effects of their prematurity!!! Amazing. I am so proud.
I have to say, I am so in love with Griffin. What an incredible baby he is. He sleeps like a champ, gets up only to get a diaper change, feed, smile and coo than goes right back to sleep. He is sleeping 6 hours at night and is only awake for 15 minutes to eat before going back to sleep. I am so lucky. It could have been awful throwing another kid into the ciaos of our lives but he fits right in. He is holding his head up for long periods of time. He is laughing out loud and cooing up a storm all at 2 months old. He sleeps through everything. He never wakes up when the boys are screaming or I am. He actually seems to sleep better when the house is at it's noisiest! I am so incredibly lucky!!!!
Thanks for all the inquiries on my new blog. I have been writing up a storm. I should have it all up and running later this week. I just had no time to publish it yet but I will. It's full of rants and raves that you all have come to love so I'm sure it will be a huge hit!
Posted by Stinner at 5:29 PM