What a difference a week makes! 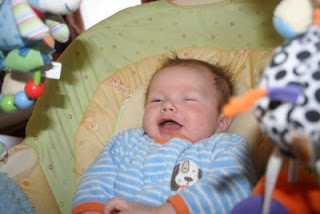 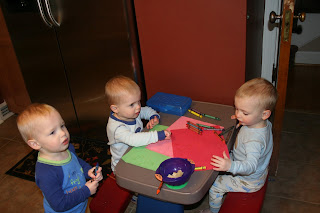 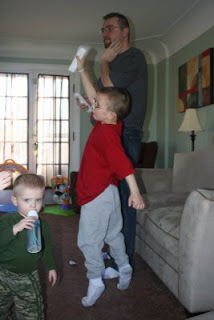 Daddy and Austin playing the Wii 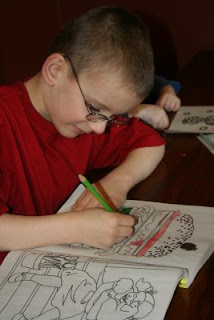 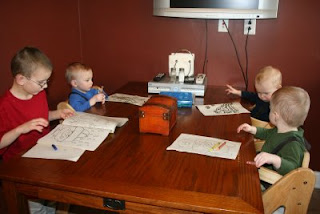 a table full of men!

What a difference a week makes!
This has been the longest winter of our lives. The sickness was unbearable. But this last week was one filled with happy healthy children and warm weather. I was finally able to air out the house. I figured it couldn't do any harm to open all the windows and doors and Lysol everything. Hopefully, I killed all the bad germs that have lingered in here for the last 4 months. We spent several afternoons outside enjoying the sunshine. The boys played in their octagon(the portable fence we set up to contain them) with their bikes and outside toys. Austin rode his new bike up and down the driveway and did his best to pull his brothers around in their wagon. Griffin was content to be snuggled up in the Baby Bjorn. Ah Spring! It's almost to good to be true. But wait, in true Buffalo form today...it SNOWED!
We had a lot of visitors this week. It's always nice to have people stop by and see the kids. We had some family friends come to see Griffin and play with the boys. I love to be surrounded by positive people. People who wish you know ill will, those who just legitimately love us and our kids. And to get love and support from the unexpected was amazing. No drama that's what our life is about now! My sister Adrianne stopped by as well as Grandma Linda and my mom. They all had a blast hanging out with the boys and cuddling the baby. At one point my mother was laying on the kitchen floor coloring. Who could ask for two better Grandma's? They just so genuinely love my boys. It's almost like they can only see the good in them. They never point out the bad. That's what being a good grandparent is all about I guess.
The triplets are growing at such an alarming rate. They hate to be confined to their high chairs now. They want to be big boys, like Austin and sit at the table to eat and color. Well, I couldn't let them do that because the chairs are too high. So we decided to get them a little tykes picnic table for the kitchen. They LOVE it. They sit their for their snacks and to color. I think they like the sense of freedom it gives them. They can come and go as they please and all though this is more mess for me, it is well worth their happiness.
Austin is such a great kid. He has really overcome allot of the issues he was having before. I think he was just overwhelmed and attention starved. We all have such a good routine going now that it frees up more time for him and he just eats it up. He is thriving in school. He almost can't wait for Mondays. I even caught him making up math problems and solving them. He's such a little intellect. I hope it continues. I'm just so proud of him. His spelling is getting so good that David and I now need to censor ourselves. We can no longer spell the words we don't want him to hear. He catches us every time!
What can I say about Griffin? Well, this baby is just such a gift from God. He is so easy going. He sleeps for 6 hour stretches at night, wakes for a small bottle than sleeps again for 2 or 3 more hours. When he's awake, he's the happiest baby. He very rarely cries and is happy to be on the mama. He eats like a champ and at the pediatricians on Tuesday he weighed a whopping 13lbs 5 oz! What a little piggy! He is now in clothes for a 6 month old. The doctor says he is in the 50th percentile for height and weight so he is by no means fat. We like to think he's just pleasantly plump!
Every once and a while I need to say some things about my husband. I know I don't mention him a lot but that's because this blog is my children's life through my eyes. My husband is a very hard worker and it's my job to deal with the day to day dealings of the kids. That sounds really archaic but it's not. It's just our division of power. Through all the tribulations of our life he has stayed true to who he is. He is such a hands on husband and father. He has really stepped up and helped with the kids and dealt with the issues he needed to. 9 years and 5 kids later and we are stronger now than we have ever been. I wouldn't be half the woman I am without him!
Posted by Stinner at 1:38 PM