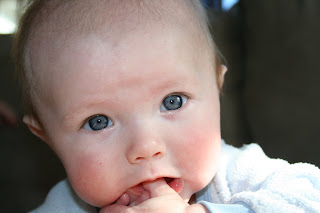 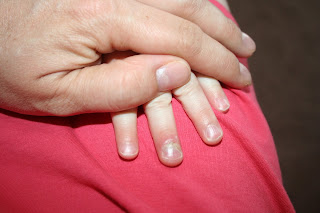 Medical Intervention!
I took Griffin to the Doctor for his 4 month check up. He is an amazing little man. Trying to sit up and rolling over. He is in the 75th percentile for height and weight! 15.35lbs and 23 3/4 inches long! He's a moose. A happy, smiley, talkative, mostly sleeping through the night moose! The only downside is he will need minor surgery soon for an undecended testicle. AWWW, my poor baby. I'm sure he'll be fine. Unfortunately I have to post pone some summer plans until I know when his surgery will be but I'm sure all involved will understand.
Wednesday was a beautiful day. The sun was shining and birds where singing. I decided that the boys needed fresh air and I needed to do some yard work. I set up the boys fence, brought out some toys and started to trim the bushes out front. I figured since Austin was due home at anytime I would work out front. Before long Max was getting fussy. He really doesn't like to be confined for very long. I decided I would put the kids back in the house one by one and clean up later. First Max since he was fussy, than Emerson, Alex third and Griffin last. The older boys are pretty easy to just open the door and set them in. The house is baby proofed so they really have no where to go. I didn't want to leave anyone alone so I would just put them through the front door than go get the next one. I put Max and Emerson in and went to grab Alex when I hear SCREAMING! It was Maxim. My heart sank as I ran into the house with Alex. Max was holding his hand and their was blood dripping down. A mothers worst nightmare. I grabbed Max and a towel that was conveniently on the floor. I wrapped his hand, placed him on the floor and went to get Griffin. When I got everyone safe in the house I looked at Max's hand I realized he had got his finger slammed in the large oak door leading to our foyer. Emerson loves to close everyone in the hallway and he must have shut it as Max was pulling himself up. Oh well, what could I do. After I cleaned Max up I realized this would be the first trip to ER for one of my boys. I had to take him because he was favoring his middle finger as if it where broken. I called David, who immediately came home. I rushed Max to the hospital fearing the worst. They ushered us in quickly and into X-ray. Within 1 hour we where told Max did not break any bones! He just bruised it very badly! Thank God! I was so worried and the fear of having his hand in a cast and trying to prevent everyone form yanking on it was freaking me out. Anyway, he is doing well. The finger is still swollen but is healing. I hope he doesn't loose his nail, that would just be gross!