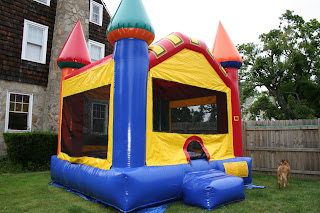 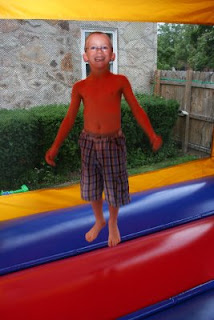 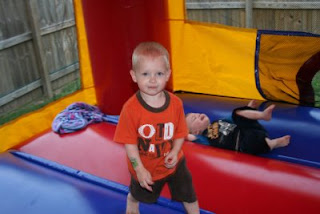 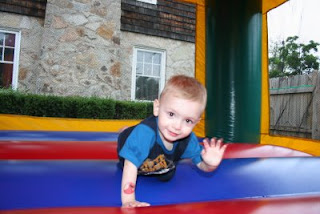 Emerson is so happy, he smiles and waves! 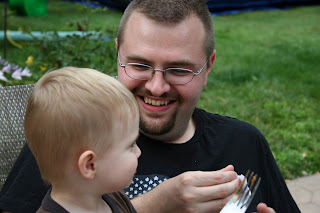 David and Alex share the Polish dinner from the Canal Festival. 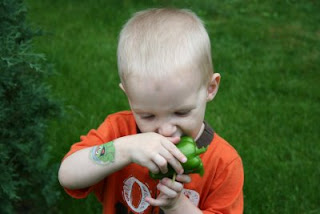 Maxim and his pepper from Mommy's garden. 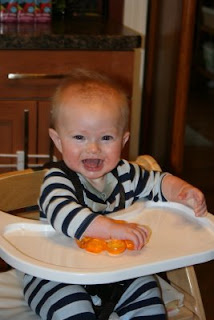 Could Griffin be any happier? He's such a big boy!

Bounce Baby Bounce!
As I'm sure you can imagine the bounce house we recently purchased is a huge success amongst my children. Since the weather has been so rainy and miserable it is an even bigger success than the pool. We have been bouncing pretty much everyday, well in between torrential downpours and thunderstorms. At first it was just Austin bouncing his little heart out, than Emerson, slowly Alex and now Maxim. For some reason Max was leery but he quickly overcame his fears when I took him in and let him bounce solo. Now every time I turn a round the four bigger kids(Austin and the triplets) are bouncing. I'm glad we got the commercial one. I looked for ones sold in toy stores and realized we would have popped it by now. I know it will prove to be a wise investment with 5 very active little boys.
Speaking of active boys, Griffin is my little wild man all of a sudden. He is now over 6 months old and is growing like a weed. At well over 18lbs he is almost the size of his big brothers that are 16months older than him! He can definitely hold his own when it comes to wrestling for a toy or grabbing for something he wants. He is eating up a storm. He wants all the orange stuff( carrots, sweet potatoes and peaches) but what he really craves in BREAD! I know it's probably just the teething aspect of bread, but he loves it. He is definitely a little German baby! He has this funny hair that sticks straight up in the center of his head like a rooster. David claims I comb little Mr. Griffin's hair this way but I do not. He's just "spikey" by nature! Anyway, he is an amazing little man. He has even begun to stand up holding onto the couch (with a little help from mommy or daddy of course). He's so strong and strong willed too. He does this growling yell, that I can only assume is him mimicking me. It's adorable. His face gets all red and he belts out this "RARARARH" sound. It's going so fast. It almost makes me want another one...ALMOST!
We have harvested quite a bit from the garden lately. The Zucchini and squash are HUGE! We have been eating them almost everyday. I am on the look out for more and more recipes for both. I am hoping to get enough squash for Griffin to have fresh baby food. Max is the veggie monster. He runs into the garden and grabs peppers off the vine and eats them whole. I can't wait for the tomato's to get ripe. They are taking their sweet time. They are huge though. If we could get just a few days of hot weather I think we would be good to go! You should see my pumpkins! WOW! I am so excited the kids are going to be able to pick their own pumpkins. With all the rain they are getting so big, I would say some are already the size of a large softball. My cucumbers didn't seem to like all the rain though. All except one plant died. We have around 20 cucumbers on that plant but just the one. I have all of a sudden grown a green thumb and I am very excited since I thought I would kill everything!
The boys birthday is right around the corner and all the final preparations have been made. I am looking forward to seeing friends and family and for the boys to turn 2! I can't believe they are almost 2! Where did the time go? I'm hoping the day goes smooth and we have NO drama. I think this year will be a good one.
Posted by Stinner at 9:45 AM