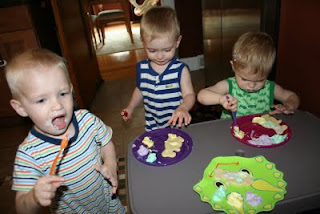 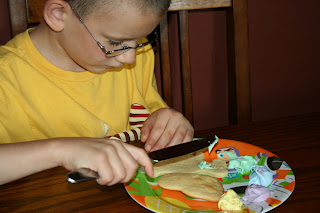 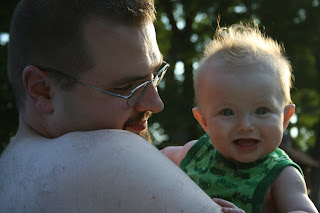 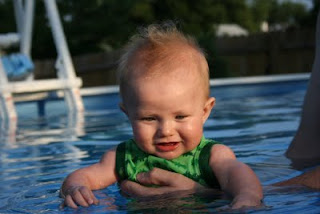 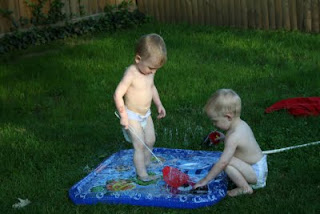 Em and Max playing on the water mat. 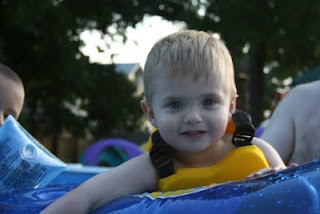 Alex is my fearless swimmer!

Well, I'm not exactly sure where Summer is but we are are waiting patiently. We have been taking advantage of every single moment of sunshine we can. We finally spent some time in the pool. That's not bad, the 1st week of August and we are just now getting in use of our pool. Alex is a fish, this kid loves the pool. His lips are blue, his fingers are prunes but he's swimming away. HE loves his arm swimmies and with a tube floaty he is on his own swimming around the pool. He literally has no fear! Austin is still using his arm floaties because the pool is just way to deep. I refuse to let him take off any floatation devices until he can touch the bottom. Call me crazy, call me insecure but that's how I feel! Emerson and Max down right refuse to go in the water. They love the water table, the water mat and the hose but I think the pool is just too cold for them. Now Griffin has no fear either. He got right in with David and began to kick his feet and move his hands. He loved it. He was happy, splashing and laughing. I think we have another water baby on our hands...YAY!

I have some exiting news about little Mr. Griffin, he said his first word! While jumping in his bouncer he looked at me and with a huge smile and said "mamamamamamamamama". I'm overjoyed that his 1st word was mama. He uses it quite often to get my attention if I walk away from him. He even says it after the boys say it. He is just an amazing little man who thrills me everyday! After I began typing this blog I had Griffin on my lap and he latched on to my finger with his mouth and much to my surprise there was a TOOTH!!!! My baby has his first tooth and has said his first word. I'm so excited, but on the other hand it's a little sad. My baby is growing up! Pretty soon he will be a big boy, independent and strong like his big brothers. Where does the time go?
Posted by Stinner at 1:55 PM