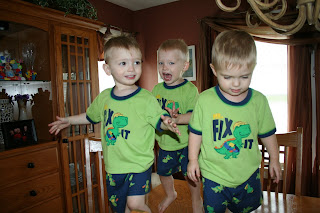 Yes, they are on my dining room table! 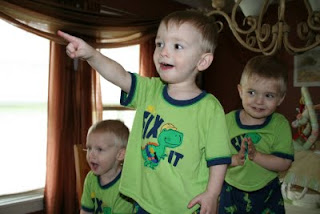 Emerson points out that they can jump to the China Cabinet from there! (I love their faces in this picture. Note Alex looking deviously happy and Maxim's look of "oh I never thought of that"! 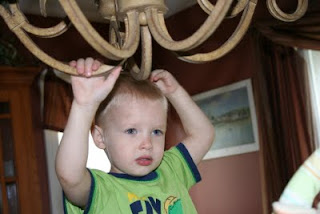 Maxim chooses to hang from the light! 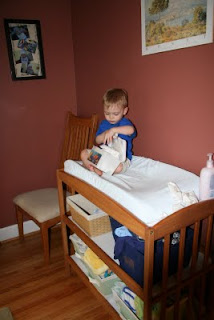 Emerson manuvered the chair to get on the changing table and play with the wipies!

Escapees!
I think my kids are going to be the death of me! This has been one of those weeks that I just want to crawl into bed and not come back out until they are grown. After the bus debacle with Austin was resolved I thought I was in the clear. Well, that didn't last long at all. On Friday my three "little angels"(I use that term loosely)decided it was time to stage a mutiny. They began with escaping from the gate that has held them in the living room for over a year. With a resounding "kerplunk" Maxim and Emerson where over. Alex tried his darnedest but was unsuccessful. In what seems like seconds I had one child climb on the changing table, flipping the light on and off. The other was on top of the dining room table literally hanging from the chandelier. After collecting my two small escape artists and returning them to their toy infested, peanut butter stained play area that I used to refer to as my living room I returned to pile of dishes I was trying so desperately to clean. Only to turn around and see 2 small faces staring back at me. They giggled and ran back to the dining room where again they climbed onto the table and where AGAIN hanging from the chandelier. In desperation, I turned on a movie...they escaped! Left the dishes to rot and joined them in the living room and they escaped again. I than decided to just let them loose. Maybe if I allowed them their freedom they would not try and get up onto the changing table and dining room table and they would be content to just play under my feet. Yeah well that didn't work either. They climbed and swung again. At one point all three where on the table dancing a jig and taunting me. I could see in my little Griffin's eyes(who was watching the whole mutiny unfold from his walker) that he too would be joining his brothers if his legs weren't so short!

After several stressed out hours, I called my sister Adrianne. I asked her to come watch the boys so I could go gate shopping. Hoping to find something taller and sturdier I set out to Babies R'US. I must have looked frazzled, because a sales clerk asked me if I needed help and I replied..."More help than you can give me." The poor girl unwavering, asked about my dilemma and I told her. She suggested an "Extra Tall" gate system to keep them contained. Of course...they where out. OK, so now what? I decided my main goal was to keep them out of the kitchen. That's all I really need right? Well after buying 3 gates, differing in size and height, I went home to install them. Success! The kitchen gate was extra tall and worked. I got a permanent gate for across the stairs that may work and a mesh gate for across the dining room. Well, I thought it worked. Within 5 minutes Emerson had escaped and knocked down the mesh gate. He was again on the dining room table and Maxim followed. OK, I give up! When David came home we decided to get an extra tall gate for the living room. We maneuvered what Babies R'US had, put it together with pieces left over from kitchen gate and fashioned an extra tall security gate. By morning I was excited to see if it would work. Within moments Emerson had scaled the new gate and was on the table. Finally I just removed the chairs from the dining room. I'm sure it's just a matter of time before they figure out how to get up there again. Perhaps standing on each others backs? Griffin standing at the new XX-tall gate(that the boys now hurdle themselves over)! Oh yes, he stands and let's go!

I wish I could say I have 5 angelic boys that sit and play all day peacefully and quietly. But that's not the case. I have 5 energetic young boys who are adventurous. This doesn't mean they are bad. They are just boys being boys. I know this time will pass. They will grow up and the days of frustration I felt will be replaced by new frustrations and challenges. I'm OK with that. I am doing my best to try and take it all in stride. I chalk all this up to experience now. Who knew I was a short order cook, a sheriff, a master craftsman and an engineer?

While I sat here typing this blog, Emerson again scaled the living room gate. He joined me on my chair and put his arms around me. This IS my life, these are my kids and I will do whatever it takes......It's all for them!
Posted by Stinner at 8:14 AM