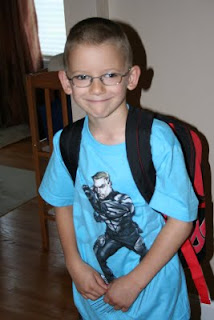 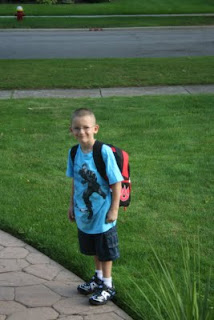 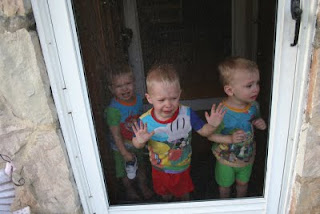 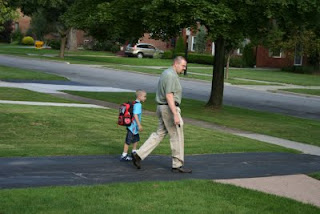 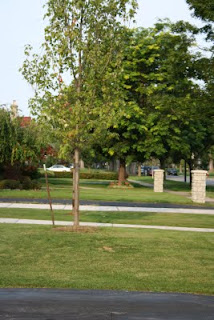 See them? Me neither!

First Day of 1st Grade!
It's official! Austin is at school! Phew! What a long summer that was. He was so excited to pack his backpack and put on new clothes and head off to that bus. It didn't matter to him where he had to catch the bus as long as he was on his way back to his favorite place...school. I know, I know, what kind of kid loves school that much? Well, mine does! He has been so excited the last week all I hear is, "mom, who will be in my new class?" "how do you think my new classroom will look?" "what time do you think lunch is?". He was just jumping out of his skin waiting for Tuesday to arrive. When it did he jumped out of bed, got dressed, brushed his teeth, ate breakfast and got all his supplies ready without me even having to ask! He was all ready. He looked at me and said, "take care of my brothers, mom. I'm going to school!".
We had a little drama with the bus stop change. Last year he was picked up and dropped off right in front of our house. It was wonderful since I had the three babies and was pregnant with Griffin. I just had to watch for the bus than run outside when it came. The little ones where never alone. But this year when I got the bus notification it said his new pick up was over 20 houses away! On our street where the houses are spread apart, this was a HUGE distance! Than the drop off was set across are busy street on the complete opposite side and 2 doors down! How was I supposed to do this with 4 little ones? I couldn't very well let Austin cross the busy street alone, I couldn't leave the boys alone either! I couldn't let him wait for the bus in the morning 20 doors down with no adult supervision. I was freaking out! I tried several thousand times to call the DOT but it was constantly busy. Even at 11:45pm...how is that possible? Anyway, David took him down to his new bus stop the first day and I couldn't even see him from our front lawn. In tears I watched as his bus past right in front of our house, just like last year. My big boy was in his seat waving away. Well, this just infuriated me! How dare they say my child had to walk so far, what';s going to happen in the winter and what could I do to change it? After my saving grace(Mrs. Debby) arrived I set out to the DOT. If they weren't going to answer the phone than they where going to suffer the wrath of this pissed off mom in person. I rang the buzzer...nothing. Did it again...nothing! I was really angry then! Well, after going to visit my husband a work he decided to accompany me back to the DOT to see if we could tag team them. Well, this time they answered. I was glad I brought David because I would have went in their guns a blazing. He was nice and calm. I was fuming! Especially when the supervisor said "I don't care what your home situation is, I don't care if you have 1 leg, that doesn't concern us". WHAT????? What kind of statement is that. I wanted them to know my concern was for my 6 year old. He was too young to cross a busy street and he shouldn't have to wait 20 door down for a bus! It was unsafe! That jacka$$...sorry! The supervisor than said to David, well, I will review it and see what I can do...maybe. We left with only one resolve, that his drop off would be across the street from our house instead of across the busy street. They said it was a software malfunction, yeah right! I was so enraged I called the Superintendent's office for our district. I was politely told that the DOT would handle any problems in due time. Whatever, they where useless too...Next thing, I'm going to the newspaper!!!!!!!!!!!!!!!!!!!! Putting our little ones in danger, for what ...time constraints? I pay more taxes than anyone else in my district because of the street I live on! They screwed with the wrong mom, now I'm really angry!
This morning when David left with Austin for their mile long hike to the bus stop, I asked him to please ask the bus driver if any changes had been handed down. When my phone rang 10 minutes later I was shocked. It was David, he said he talked to the bus driver and there was a stop in front of our house starting tomorrow! I guess we will hold on calling the newspaper for now. The point to my story...Never just sit back and take crap from people. Get involved in your children's lives and well being! If you don't like something, speak up! We should never put our child's safety aside because someone says we should. Be strong, be bold, be...the best parents you can! What a difference a day makes!
Now my big boy is off to school. Completely unaware of the drama that unfolded on his behalf. That's just fine with me. I'm so proud of my 1st grader, what an amazing child I have!
Posted by Stinner at 1:26 PM