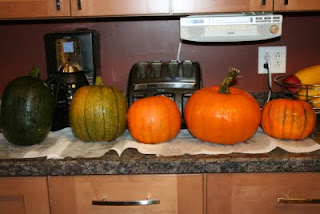 Look what I grew! 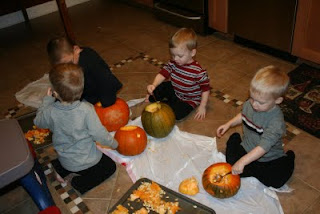 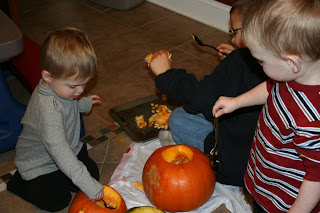 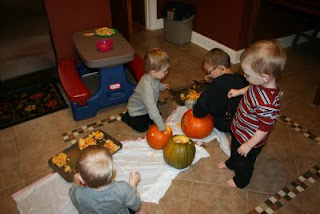 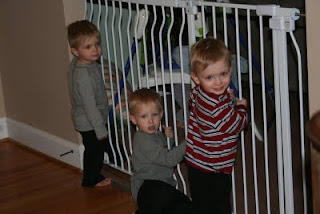 Up to no good! 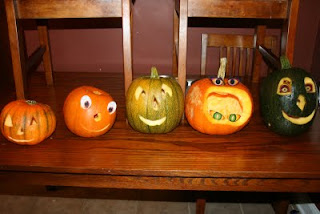 Happy Stinner Pumpkins!
Pumpkins
Everyone knows that this year was the first year I planted a garden. I did this to prove to myself that I could. Unfortunately it was such a wet gloomy season that we lost a lot of tomatoes and cucumbers. We had a great season for green peppers, yellow squash, zucchini and of course pumpkins. This was exciting to me. I always wanted my own pumpkin patch and trust me that's just what happened. What I didn't know is that pumpkins take over EVERYTHING! They grab a hold of all your other vegetables and lay on top of them or strangle them to death. Needless to say by mid September the Pumpkins had morphed my garden into a pumpkin patch.
The kids had a blast scooping all the "guts" out of the pumpkins. Alex kept saying "swimey". Max tried to taste it and Emerson just wanted it off his hands. Austin however, was superman. He reached right in and scooped out pumpkin guts like that was the best job in the world. We carved our pumpkins with happy faces, since they where happy to give their pumpkin lives for our enjoyment. After some intense cleaning we roasted the seeds and tried them. The triplets didn't get it and Austin pretended to like them but they just weren't big enough to really enjoy. Oh well, maybe next year. We'll have to grow one of those 2000lb bad boys that win all the awards every year! HAHA, wishful thinking!
Now it's time for Halloween. We have this discussion with people every year. We approach Halloween differently than other people. We don't "celebrate" it as a holiday but rather embrace it as a day of fun and games for our kids. We allow them to dress up in fun, non-demonic costumes. Last year they where all animals and Austin a character from Star Wars. We are not real big on trick or treating, so we travel to friends and families houses for treats. We know we can not completely shelter our children from the evils of the world. So we choose to teach them right from wrong and turn something that might be harmful into something fun and innocent. I know not everyone will agree with me. Most Christians choose to ignore Halloween like it doesn't happen. But I choose to let my children enjoy the day and ignore the gore!
Posted by Stinner at 10:58 PM