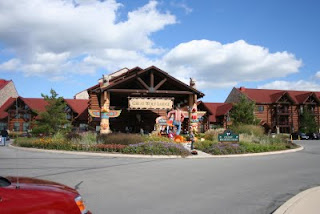 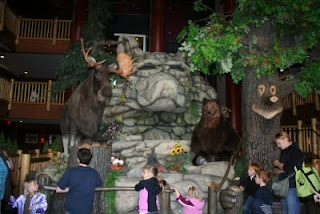 The Lobby. Animiatronics. So cool! 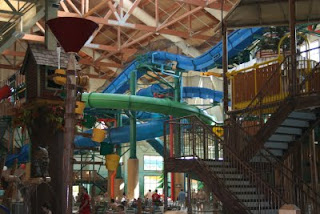 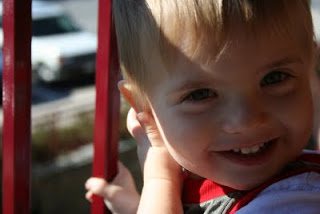 Alex on our balcony. 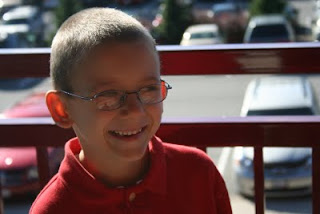 Austin on the balcony. 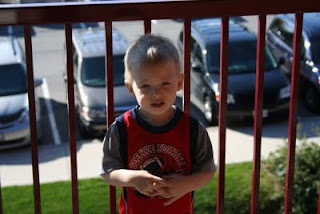 Maxim on the balcony. 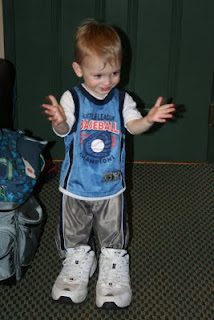 Emerson is a big man in Daddy's shoes. 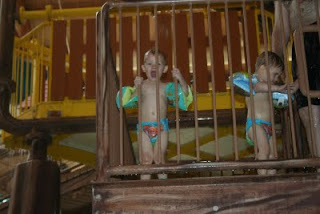 Max & Alex on the walkway above the pool. 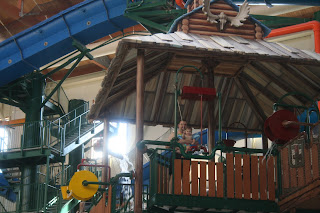 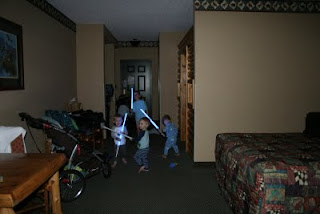 My little Jedi's having a light saber war in the room. 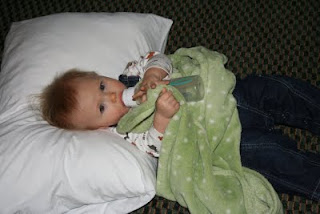 Griffin made himself at home! 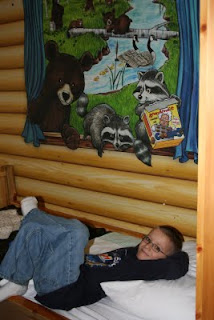 OK, it's not OUR 1st vacation but it is our 1st vacation with 5 children in tow! Anyone with several kids can tell you it is INSANE to travel with small children let alone 5 under 6 years old. It requires an immense amount of prep work, and when you get to your final destination you realize all the things you forgot. I was fortunate to not forget much. However, it's always the truly vital things that you seem to leave behind. In this case, the bottle washer. Yeah, yeah...doesn't seem like a big deal, right? Well, you travel with 4 bottle dependant kids(the triplets only need one for nap time and one for bed)and only 6 bottles. Do the math! It's tough to wash these fancy schmancy Dr. Brown's bottles with no brush. Being the MacGyver mom that I am, I bought an extra tooth brush in the gift shop and fashioned a bottle brush! Oh yeah, who's cool and genius now?

So anyway after a week of preparation we where off. We packed our van so full I was afraid the children weren't going to fit. Well, we all fit. Barely! There where bags in every nook and cranny. Off we where to The Great Wolfe Lodge in Niagara Falls, Canada. Seeing that we live less than 30 minutes(not including the wait time in customs) I figured we would be there in less than an hour. It ended up taking us a little longer than that since my hubby pulled a "I know right where it is, I don't need no stinking directions!" on me. HAHA, OK enough harping on David. We only got a little lost. After a quick stop for some more accurate directions we made it there after an hour and a half.

It was a little overwhelming at first. Everything is huge and there are people everywhere. The kids where relieved to be in our suite at last. They immediately began running from end to end checking out all the cool stuff. Their little area had bunk beds. Every wall was painted to look like the inside of a log cabin. There was raccoons and bears painted everywhere and of course wolves. They spotted the fireplace and banged on that. They climbed up on the tables and banged on the walls. They explored the bathroom and than discovered the safe. Let's just say it had buttons and made a cool beeping sound. I doubt if anyone will every be able to get it open again. The boys made that priority one!

We headed to the water park shortly after arriving. They where a little overwhelmed, OK a lot. There are tons of people. There are pools and tubes and water slides and geysers everywhere. The water is shooting out from all angles, the walkways overhead had cannons and hoses and a huge bucket that dropped hundreds of gallons of water on those below. Not to mention that the noise is just deafening. Alex loved it. He put those floaties on and off him and Austin went. They where looking all around and splashing up a storm. Max was OK, but a little apprehensive and Emerson wanted no part of the water at all. He just clung to my chest and wouldn't let go. I know my poor little man was just freaked out by the whole thing. Griffin on the other hand was a fish. He tried several times to dive out of mine and David's arms to get in. He would splash and laugh. 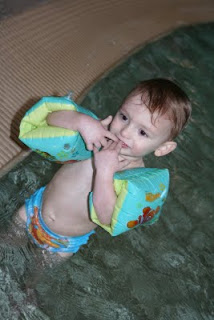 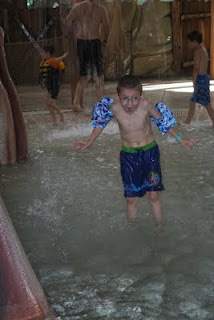 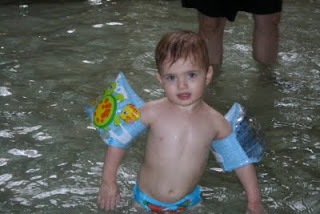 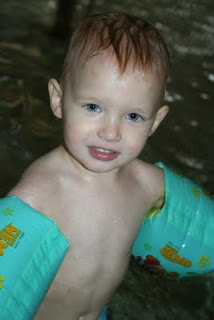 After an hour or so we headed to the room and got ready for dinner. This is a huge undertaking with 5 kids. Swimmy diapers off, clean diapers and clothes on. Mommy get dressed, daddy get dressed, Austin get dressed. Get sippy cups ready, get diaper bag packed. Everyone back in the strollers and head to the elevators. Now breathe! Briefly.

Can you imagine the look on the waitresses face when we said "A table for 7 please, with 4 high chairs." It's the same look we get everywhere we go, utter confusion. The boys don't eat out much but they seem to like the immediacy of buffets. David arranges everyone while I get food. By the time they sit, VIOLA, food is served. They are not used to having to sit stationary and eat. They do a free range thing in my house because they escape anyways. So after some minor melt downs they settled and ate. This was pretty much the same routine for every meal.

We got a ton of comments. Mostly, are they triplets? I got a "Are those quaDROOPlets?"(misspelled just like she said it). I answered everyone kindly and got a lot of "God Bless You". I even met a man in the elevator who also had triplets age 4 and a 5 year old. I was happy to be able to relate to someone even if it was only a 45 second elevator ride. We smiled sweetly when exiting feeling each others angst. Mostly people just stared and quietly counted to themselves. It's almost like "do my eyes deceive me? I must count!" HAHAHA! Yes there are 5 kids...all boys!

The second day we went to the water park several times. Emerson decided he wasn't afraid and that he too was a water baby. By the end of the day we almost had to fight them to get them out of the pools. They loved it! All 5 kids just splashing away, smiling, laughing and enjoying every moment. They loved running up and down the long walkways up above the park. They spilled water on people heads and took getting hit with water cannons with a grain of salt. We even got the huge bucket of water dumped on our heads several times and they just laughed and ran except for Griffin who smiled and splashed in a big puddle of water!

The 1st nights sleep was a little stressful. Alex was awake most of the night. I'm not sure if it was because of the new surroundings, the excitement of the day or the fact that he kept falling out of bed! OK, so they are definitely not ready for beds yet! It seemed every 5 minutes I was picking someone up off the floor. The next night I got smart! I pulled the mattress off the pull out couch, put it on the floor and surrounded it with pillows. We even pulled the mattress off one of the bunk beds to block off the stone fireplace. It was a make shift floor crib. Anyway, it worked out great and the boys, David and I got a good nights rest. 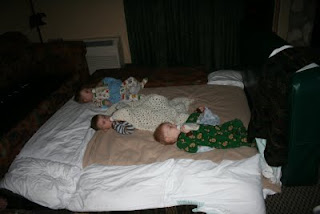 The last day was uneventful. After a hearty breakfast, of which most of it ended up on the floor if the restaurant, we packed and headed to the water park. The kids splashed and played for a couple of hours. Austin even made a friend that he was swimming and playing around with. The boys swam until they just about passed out. We changed everyone fast and by the time we headed out of the park area 3 of 5 where snoring! We grabbed some lunch to go and headed home just this afternoon.

I am pleased to say we made it over the bridge and home in less than an hour. Good thing since the kids where all exhausted and I seem to have contracted a terrible head cold. All in all it was a wonderful three days. My boys where amazingly well behaved and we proved to ourselves that we can still go out and have fun with 5 kids. Now for some much needed relaxation, and who knows maybe we'll tackle Disney next time....MAYBE!
Posted by Stinner at 4:38 PM