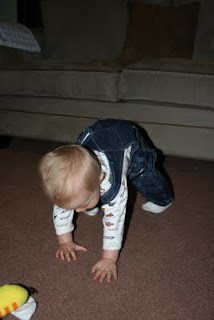 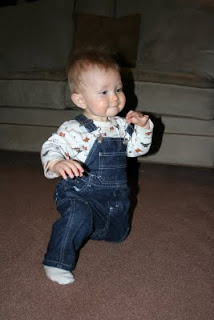 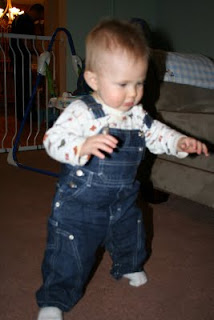 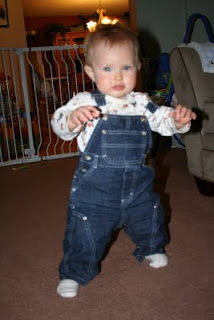 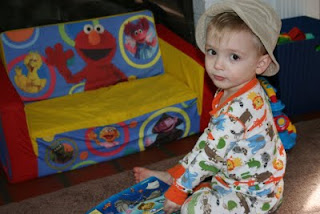 I love this picture of Emerson. He was reading his book so seriously with this hat on! 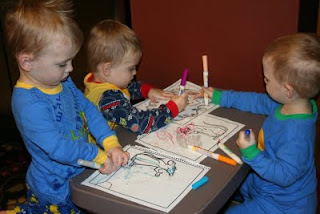 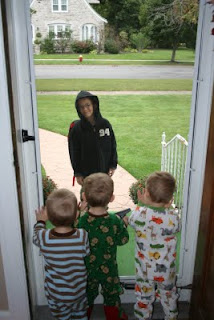 OK, so we all know I am enamoured with my children. I turn into this oooey gooey mess when my children do something cute. I can't help it. Case in point...Alex has been talking up a storm. In fact, this kid has been talking up a storm since he was 3 months old. He's always had words to say and stories to tell. Now it's more his articulation that has me dumb founded. Most recently he looked at me and said "oh man, ut oh. Em di it on da for ge it agin". Did you understand that? No? Well, I have PH.D in Alexology so here we go..."Oh man, Emerson threw the markers on the floor again, pick them up". At dinner last night when asked if he would like a cookie for dessert Alex said "yeah" but than quickly followed it up with "Yes, cookie peeeeese". I guess he even listens to me when I correct him. How smart is he? He is the comedian of the group as well always making silly voices and faces. Emerson AKA "the pole vaulter" is still up to his amazing feats of daringness. He can fashion a ladder out of almost anything to reach the heights he wants. If he wants to get on the table in the living room, up he goes. I find pillows, bowls and the occasional diaper stack all piled high. But let me tell you, this kid really needs nothing more than his "monkey feet". He curls his toes around any bar or handle he can find and scoots right up. Maxim is quick. I turn around and think he's one place and he's another. I think I may call him "dash". I pull him down off the window sill(he perches up there and watches) and by the time I go to walk away, he's back. I find him hiding all over, like behind couches and in closets. When I turn around....zoom, he's gone again. That is unless our Deb is here. Than he can be found on her lap. He scared me to death last week. While I was vacuuming he somehow managed to scoot by me. After realizing he wasn't where he was supposed to be I frantically ran through the house(quite difficult due to my recent surgeries) looking in every corner and crevice. I ran to the basement and nothing. Panicking I stopped for 1 second to regain composure. Knowing he didn't get outside but fearing the worst I attempted to open the patio door, when I heard foot steps above my head. I ran into the attic(which is redone)to find him playing with toys in the attic living room. Man, what this kid gets into in less than 1 minute is unbelievable. All I have to say is Thank God I was blessed with patience.
Austin and I went to his schools Fun Fair this Saturday. It's nice to have some alone time with him. On our walk over we talked about school and new friends. He explained the rules of his new classroom and boasted about his new teacher. He's growing up so fast now. Almost over night he went from this annoying little kid to this intelligent, question asking machine. His curiosity is just unbelievable. He wants to know how the world works. I love that. He was thrill;ed to hang out at school with his best buddy Zack while I worked the prize table. School is important to Austin. He loves it. I hope it continues to be like that. I'm sure it will.
Now on to my SUPER BABY!!!!!!!! Griffin is the most unbelievable kid. It's like he's in fast forward! He now is free standing. this means he is just going from the sit position to the stand position without holding on to anything. He stands and plays with a toy, stands and watches tv, stands and plays with his brothers. He is 9 months old today! I know he will be walking in the next month. This is without a doubt. He has absolutely no fear of anything. He can crawl as fast as his big brothers run and he gets in the middle of playtime and fights. Could this kid be a greater joy in our lives? Nope!
Lately we have been really getting involved in our new church. It's wonderful to have a church family that cares and supports you. To be so involved with the direction a church is headed and to have such an intense spiritual connection to others is just such an amazing blessing. We our so happy our prayers have been answered. Positive spirituality gives you such an overwhelming sense of love. Rather than the negativity some people take from Christianity. I am very proud to be a part of such an amazing church family and to have our children be involved as well. God is good!
Posted by Stinner at 11:28 PM