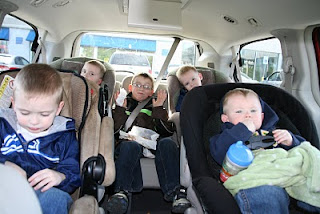 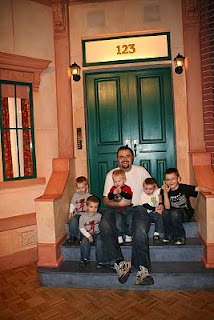 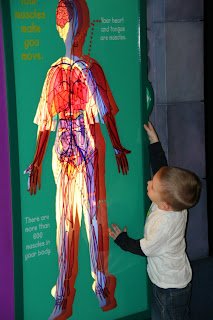 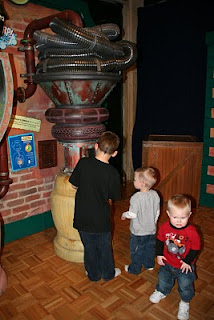 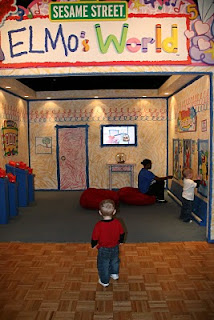 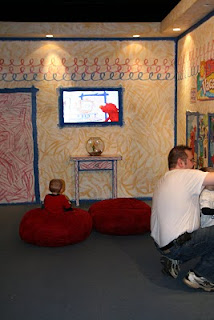 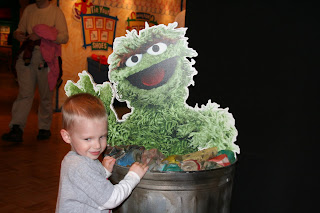 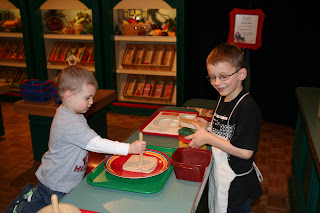 Trying to find activities that will appeal to a 7 year old, 3 two year olds and a 16 month old isn't always easy. In fact, it's quite difficult. I was very excited to learn that Elmo, The Body was coming to The Buffalo Science Museum in March. I figured the triplets would get a kick out of seeing the simulated Sesame Street and Austin would get a kick out of going to The Science Museum. I didn't think Griffin would care much about going but whatever, he could tag along.

David decided to get out of work early on Friday and even pick up Austin from school an hour before his normal time so we could venture over to the museum. All would have been fine, except the triplets decided to not go down for their regular nap and fell asleep 30 minutes before we where supposed to leave. I let them sleep as long as I could but they still got less then an hour. Much to my surprise they where in great moods.

When we arrived at the museum, I have to admit, I was feeling a little stressed. It was probably the unknowing of what was going to happen. If the exhibit was busy, how would we handle ALL 5 kids with a million people????? Well, when we walked in there where less than 20 people walking around. WHEW, what a relief. The boys immediately looked around and all seemed in shock. We set them free and watched as they looked at each station in complete amazement. They looked as if they where actually on Sesame Street. Alex kept saying "Mom, look...come here". Emerson kept saying "OH NO!", which is his shocked statement when he doesn't know what else to say. Maxim ran right up to the steps of the Sesame Street brownstone and rang all the doorbells. I'm not sure but I think he was waiting for someone to answer. Griffin had the best reaction I have ever seen. He stood at the opening of what was Elmo's world. It was a very large reproduction of the TV show, his favorite TV show. He looked like he was . He he was going to cry but in a good way. He stood there for what seemed like forever. Finally he ran in and touched EVERYTHING. Than he sat in a very large bean bag chair and watched Elmo's world. He was happy and so where we.

We spent an hour with the boys learning about the body and all it's functions. We learned about chewing, digestion and even pooping. Yes, EVERYONE poops! The boys got lessons on how to wash their hands and Emerson was fascinated with a display about the circulatory system and how your blood flows. Austin and Alex spent forever in Hooper's store making sandwich's and I think Maxim got in a war with another kid, using the scanners as guns! DAMN boys, will use anything as guns! They just kept running from one display to another. They had a great time and fun was had by the whole Stinner clan. It was the least stressful outing in months!

After leaving Elmo The Body, we ventured around the museum. We checked out all the cool exhibits including the Mummy's, Animals and even the Dinosaurs. They where excited to see the cool bones, WOW, they are such boys. The boys where tired and hungry so we headed home but not before stopping for some crappy fast food and having a "car picnic". It was an amazing day and we ALL survived!
Posted by Stinner at 11:53 PM