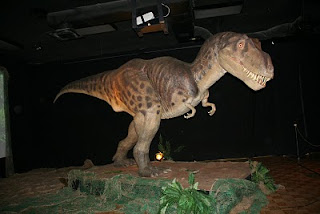 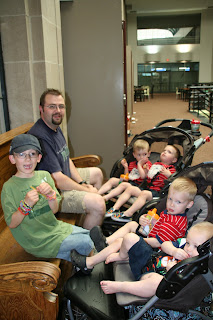 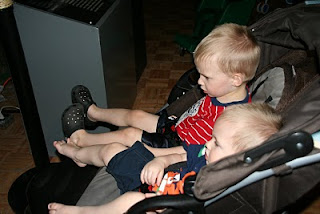 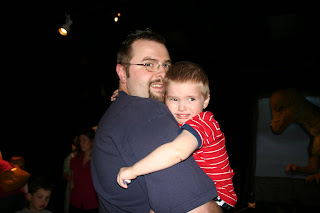 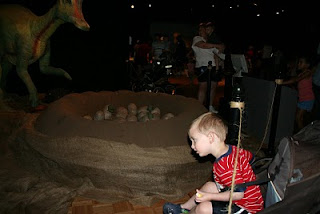 I have been neglecting my blogging duties terribly lately. Out of sheer exhaustion an peer pressure I sit here writing this now. We have had an eventful few weeks. Austin said goodbye to 1st grade and we all said HELLO to a viral infection! Some of the kids manifest into a terrible rash and others got ear infection. Now they have just settled into a wonderful summer cold. Not that that stopped the Stinner Clan! We stopped in at the Science Museum and said Goodbye to Elmo the Body only to return on Friday to see a sneak peek of the new Dinosaurs LIVE exhibit. The kids seemed fascinated by the movement and realistic sounds that surrounded them. Emerson was so fascinated. He tried several times to get a closer look by ducking under the ropes they had sectioning off the exhibits. Griffin was unfazed. He preferred the new toddler play area. Alex was freaked out by the dinosaurs and cried. "NO RAWWWWWWSSSSS MAMA!" Poor baby. Max was fine. He wanted to share his sippy cup. Apparently, they must have been thirsty. All was well until Maxim took off running through the 3rd floor of the museum and some how ended up running through to the school(Buffalo Science Magnet)that is attached.

It's been 2 long weeks of preparation but I finally organised a weekend long garage sale for this past weekend. We really needed to clean out our house and make room. We where claustrophobic in here. Despite the Saturday rain, we made a killing. We where able to turn junk that was stored in our attic, basement and garage into some mad money! With it we took the kids on their VERY FIRST outing to the DRIVE-IN movie. We wanted to take them to see Toy Story 3 and realized a movie theatre would be impossible unless we rented out the whole thing(which was something I was considering). The Drive-In seemed the most cost effective and what could be the harm? The worst case scenario we would leave. Well we dressed the boys in their Toy Story jammies and headed to the Transit Drive-In with snacks and drinks for everyone. We also took the octagon baby gate in case they wanted to escape. Well they where fine for a while but eventually got restless and the gate came in handy. The only problem was now they where like puppies in a cage. People walked by and stared at the 4 little boys in matching jammies looking cute and cuddly. I was actually OK with it. I figured as long as no one "petted" them, I wouldn't freak out. When the movie started it took the boys a couple of moments to realize what was going on. Then they got so excited about the movie they where giggling and pointing. This lasted about an hour before the "fussies" kicked in. They lost interest a couple of times and then would rediscover the movie. They all made it until the end and packed up and left. It was a great experience and I can't wait to do it again...after I recover from this one!
Posted by Stinner at 9:54 PM