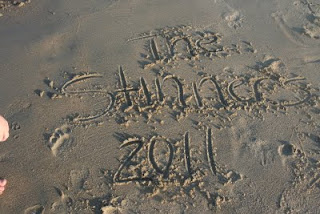 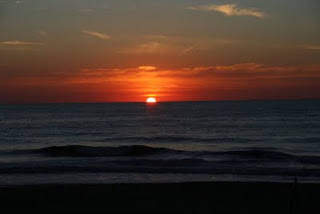 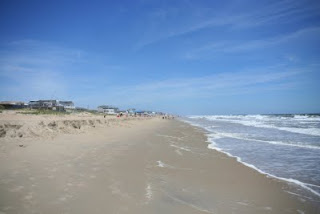 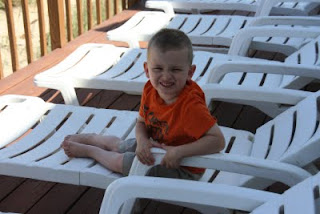 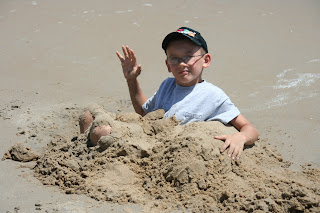 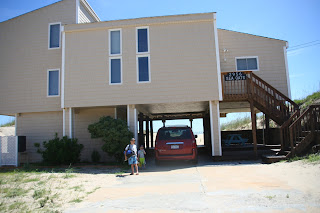 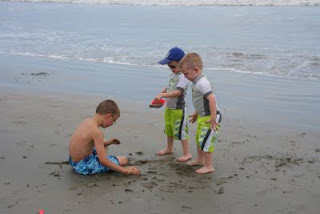 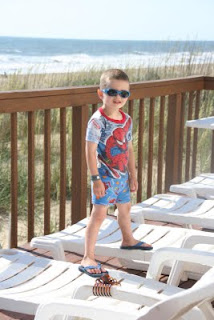 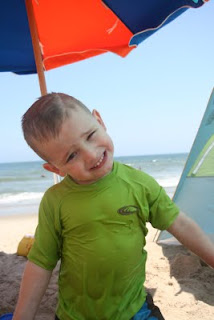 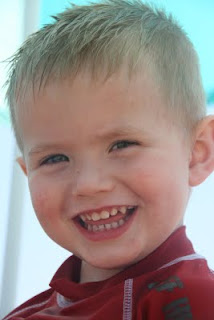 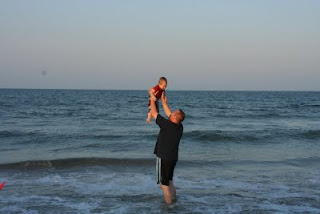 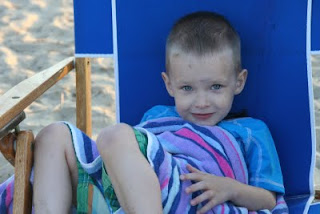 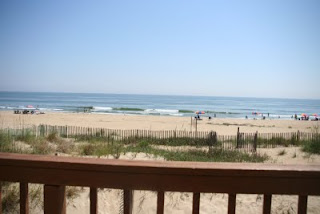 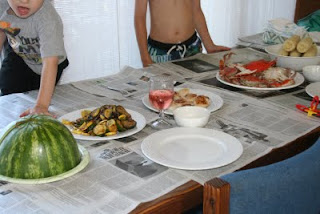 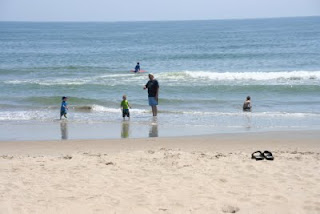 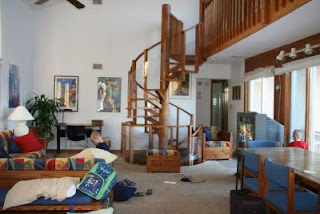 I was longing for the day I could bury my feet in the sand dip my toes in the ocean once again. After last years vacation to the Jersey Shore I was convinced only purely insane people would take 5 small children across state lines for a vacation. Then the "itch" started. You know what I'm talking about. In the dead of winter you start dreaming about the sun on your face and the smell of ocean air. Well, that feeling struck around January for me. I was feeling claustrophobic. I thought about it and discussed plans to rent a beach house with David. We would have to wait until July in order to fit it in with every ones busy schedule. So we made plans.

Fast forward 6 months. As I packed for our summer vacation to Sandbridge, Virginia Beach I remembered the days of freezing cold and thought to myself "HA..we're really doing it". We rented a private house so we literally had to pack EVERYTHING. Bed linens, food, towels, toys, bathing suits and tons of SUNSCREEN! As we packed our van tight the excitement built. We are really headed on a 2 day road trip that will take us to a beach paradise...just US.

I guess we were lucky. Our very first Puke didn't happen until 3 hours in. Max looked up from the iPad and said..."My bewwwy hurts". I reached for a small cup and caught mess perfectly. It was all downhill from there. We had puking and screaming and fighting. It was like World War 3 in my back seat. We would just get everyone calm and someone had to pee. That would cause the whole car to be disrupted again. We stopped at a preplanned hotel in Harrisburg, PA. The kids were happy to get out and destroyed the room in 2 seconds flat. They thought that was the vacation, little did they know...

5 minutes before arriving at the beach house Emerson projectile vomited all over the van. It was terrible. The temperature was around 98 degrees so I'm sure you can imagine how that went. We arrived in time to clean him and save everyone else before the vomit train proceeded through the whole family.

When they saw the beach house they were in AWWWWWW. 3 floors of new territory to explore. Then right there in the center of the house...a BIG SCARY OPEN SPIRAL STAIRCASE. This would prove to be a challenge but we worked it out. Then we opened the sliding doors to reveille...THE OCEAN. That's right, right outside our door was a beautiful beach that led to our own private ocean. OK, so the ocean was private and neither was the beach really but it was families and locals. What an amazing site. The kids ran from room to room excited for their new surroundings.

The next 6 days would be spent hanging out on the beach, eating seafood and swimming in the ocean. The kids were all fishes. They loved the water and believe it or not had NO fear of the giant crashing waves. I was stressed at times but it seemed to all work out. We encountered passer buys that were curious about our little band of boys and several people asked questions but it was very harmless.

We had several crab encounters including feeding them chex mix and getting yelled at by a woman walking 5 yippie dogs that we were littering. By the way, her dogs peed all over the beach! We saw tons of dolphins jumping in the distance almost waving at us. Pelicans flew over head every 30 seconds and practically blocked the sun! Who knew they were SO BIG! We had one shark siting. It was harmless. Perhaps a small nurse shark, we couldn't really tell she was far out. However you could hear the surfers screaming to shore to worn everyone. Then there was the spiders. EWWWWWWWWWWWW! Whenever you have water, you have bugs. Whenever you have bugs, you have SPIDERS and BIG suckers. I was cleaning up our beach mess when I picked up one of the kids shoes. A HUGE wolf spider jumped out and bit me on the palm of my hand. I don't know who was more shocked...him or I? From then on, we checked our shoes for critters!

We built sand castles, dug holes and collected shells. Most of all we started memories that will last a life time. My boys enjoyed it so much that we will probably make it a yearly event. Hopefully they grow out of the puking stage though. We loved our vacation so much that we decided to extend it and head to Washington DC for a few days on our way home...but that's a whole different story!!!!!