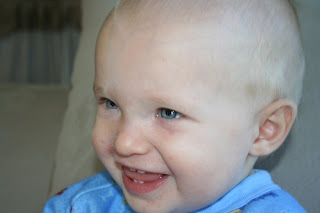 My Max, smiling as usual! 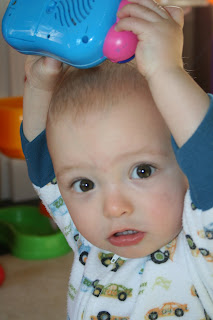 Emerson, making a call...OK, so he hasn't figured it out quite yet! 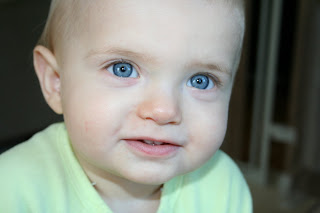 Alex, just being his cutie self!

Austin was a little camera shy this week! Must be a phase! I'll catch him next week!!!!!

They're Walking!
Well, I am officially exhausted. I have this huge pregnant belly, that seems to be growing everyday! I have three toddlers that all seem to want me at the same time. And a five year old who has the intelligence of a grown man and the mouth to match! But I wouldn't change a thing.
Some things are just worth going through for the end result. I watched my 5 year old go off to Kindergarten and I got this overwhelming sense of pride. But at the same time I was scared for him. Afraid he wouldn't be all he could be, afraid he wouldn't make friends and afraid he would hate it all. He didn't! All my fears where false. There was absolutely no reason for me to be afraid. He has lots of friends, he's listening and participating and he loves school. Who would have thought!
The boys are doing fantastic. In fact both Alex and Emerson have finally begun to walk. Alexander started taking steps on Sunday. He had taken 1 or 2 steps previously, but on Sunday he started cruising. He still prefers to crawl or to high kneel walk. But basically he walks when he really wants something. Than on Tuesday, Emerson just let go of his toy and started to walk. He looks at me with this devious look and than off he goes! Their therapist told me to entice them to walk more. So I tried semi-sweet chocolate chips. well they loved them and they both started walking where ever I wanted them to go, just to get the chocolate chip! They are so funny, before too long they will be running everywhere just like Max! Other than the walking the boys are having a blast interacting! They crack me up! They are loving playing with their toys together and playing on the couch! This seems to be their favorite new game! Life is good! Soon baby #5 will join in the festivities and life will be complete!
On Monday we took the boys to The Robert Warner Center at Children's Hospital to be evaluated. Because they where 8 weeks premature we have them evaluated to make sure they are developing normally. Well we are happy to report that they are more than "normal" they are all above average for their age. Now, technically they should be testing at a 11 month level since they are only supposed to be 11 months. But they are testing well above their actual age of 12 months. In most areas they are testing between 12-15 months. In some areas as high as 17 months! We are so happy. We really couldn't ask for more from our three little preemies.
I want to thank all of you who sent well wishes for my Aunt. I very happy to let everyone know that she is doing really well. She is finally out of the ICU and is recovering amazingly. She will hopefully be going home soon. Thanks everyone for the prayers and keep it up! It seems to be working!
Posted by Stinner at 5:22 PM