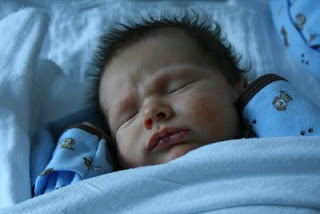 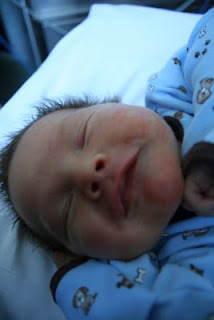 I'm not sure what he was thinking but I'm sure it involved either eating or pooping! 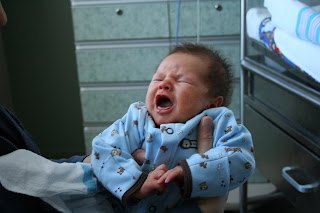 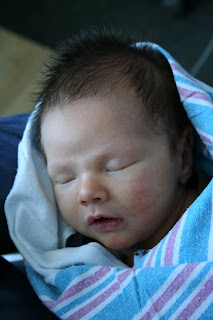 How could you not be in love with this little man! He makes me want to have a sixth...ok, maybe not! 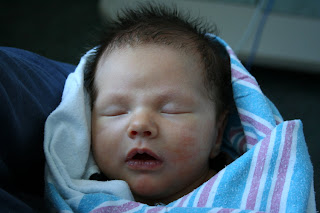 My amazing little boy is such a fighter. He came through every little difficulty like it was nothing. Every day we have gone to the hospital he has overcome another obstacle. What an amazing baby! I know, I'm completely biased! I don't know if we shared the severity of Griffin's issues with people but, his ailments where life threatening. He could have died. He would have most certainly have had the amazing Dr's and nurses not detected his collapsed lung in time. It could have caused a chain reaction and caused more life threatening issues. But with a lot of prayers and Griffin's will to overcome, he is now doing so much better. In fact today he was circumcised! This is exciting to us! This means he was healthy enough to do that procedure and it is one of the final things they do before sending a baby home. Now, we are not rushing him home. But we are excited to get him home and get our life rolling! We have faith he'll be home this weekend but are prepared for any delays! God knows we had plenty with the triplets before they finally got home!

The little boys are doing so well. Max is teething so bad! He has had a fever for three days. He wakes up almost every night and is just cranky and miserable. Emerson and Alex have 99% of their teeth so they don't have these issues. Just poor Max. He still has 6 or so left to come in. My poor boy. Alex is cracking me up. His vocabulary is developing more and more everyday. He now is starting to sing. Talk about funny. He sings "in ME"...aka "You've got a friend in me" from Toy Story. He rocks back and forth and screams out..."IN ME". It's hysterical. Emerson is loving his new CD, Britney Spears. He loves the song "Womanizer". He dances and shakes his shoulders so sweetly. He bounces with such rhythm. I've never seen such a little kid with such good rhythmic timing. I think he'll be a musician. Austin in doing much better in school. We have had no reports of bad behavior or "class clown" issues. I'm hoping it stays like this. I know sometimes he gets bored and that's why he acts out. He's such a smart boy. Sometimes his brain goes faster than his actions and he gets himself over stimulated! He's doing much better.

I again want to Thank all of you for your thoughts and prayers. I do however wish that people had been a little more supportive while I was in the hospital. Most where great but I didn't hear from a lot of friends and family that where front and center for the triplets birth. They seemed to have disappeared when Griffin was born. I have still not heard from certain people(they know who they are) and that is so disappointing since I have gone out of my way more than once to take care of them when they where sick or in need of companionship. It almost seems phony for those who where so attentive to the triplets. I think maybe because they where unique and people like to brag about knowing them or being related to them in some way. I just want to say to those people that my children are ALL unique. They are ALL amazing and they should ALL be loved for who they are not what they are. I hope certain family and friends get the point that I now know how people truly feel. Next time I may not be so willing to do all I do for people.
Posted by Stinner at 11:11 PM