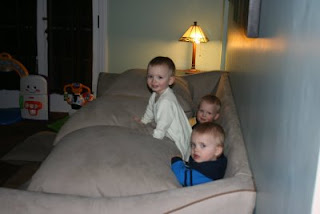 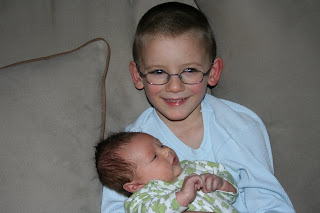 Austin and his new baby brother! 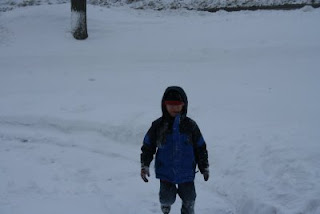 Austin playing in the snow! 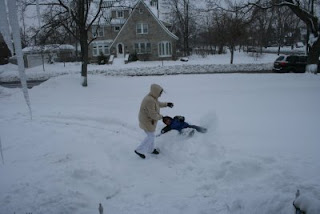 Me throwing Austin in the snow! 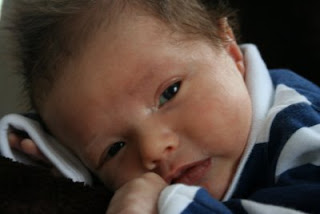 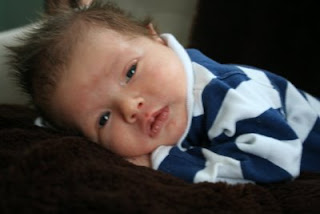 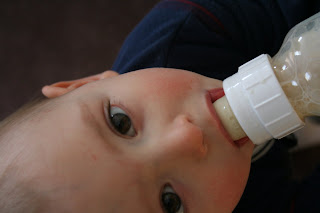 I couldn't resist the Emerson eyes!


Sick, Sick, Sick, Sick & Sick!
What a week we had. All the kids ended up with the most terrible cold. Just when I thought it couldn't get worse, it did. The puking, constant snot and diarrhea showed up. I thought the baby might have been spared. But Sunday early morning he puked up his feed, had terrible diarrhea and a stuffed nose. So far David and I have been lucky. We both ended up with the stuffy nose but that's about it. The brunt of it also seemed to miss Austin. He only was stuffy for a few days with a bad cough. I'm certain he was the one who brought it home! Damn Kindergarten germs! I am even a bigger stickler about letting people in the house during this cold and flu season. Especially anyone who works in high public areas. Nobody understand the severity the common cold has on premature children or Griffin for that matter who just 4 weeks ago(today) was born with a collapsed lung. Anyway, don't be offended if I say no to a visit when the kids are not 100%. David and I are the ones up all night not anyone else!
Austin proved to be a huge help to me this week with everyone else sick. He held Griffin and played calmly with his brothers. He also was my little gofer. I sent him all over the house for diapers, tissues and food products. He is finally maturing and growing out of this crazy boy phase he's been in for the last year. Either that or he knows his birthday is on Saturday and he's just being a brown noser. We'll see. We had a record snow fall last month and Austin was dying to play in the snow. But since he had been under the weather we where unable to take him out and let him go crazy. So when he got off the bus on Friday I couldn't help myself. He was all bundled up so I took him and threw him in the snow! He threw snow balls at me and I took the shovel and threw a ton at him. It was a blast. I only hope he gets to go sledding before the season is up. He would love that. He is my little snow bunny!
The triplets where rather lethargic this week. They where so sick, that they didn't eat or sleep much. It was just a series of whines coming from the living room at an alarming rate. It was the first time in forever that I felt helpless. I could do nothing to help them or ease their pain. They just wanted to be held and loved. This was difficult since Griffin is home. Sometimes I just had to remove myself and take a "mommy time out" in the kitchen. That helped, until the next drama.
Griffin has been growing like a weed. I'm not sure exactly how much he weighs but I'm sure he is already over 10lbs. He nurses every 3 hours and sleeps like no baby I've ever seen before. He is awake maybe 3 hours a day. So all he does is eat, sleep, poop and grow. He is already out of his newborn close and is 0-3 months. Some of them even seem a little small. He's gonna be a chunker! That's' fine by me. I had such teeny tiny babies before, that it is a true blessing to see this big, healthy, happy baby. I have been a little concerned about his eating habits. So over the weekend I went to a local lactation store where I picked up some herbal supplements and mothers milk tea to help facilitate my milk more and sure enough the supplements work. My production has increased and he is eating more and more every time. Thank God! I was dreading giving formula. Although I have tried 1 ounce here and there mixed with breast milk just to see if he would take it. Just in case I got sick and would be unable to feed him. He finally seemed interested in the last brand I tried but all the others he spit out and gaged on. It is true that nothing is like the all natural, real deal breast milk that is best for them in the beginning.
Posted by Stinner at 4:39 PM