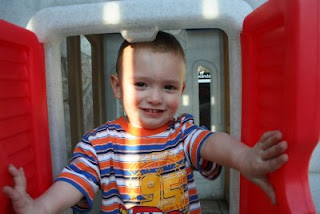 Emerson in his house! 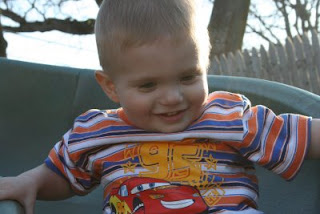 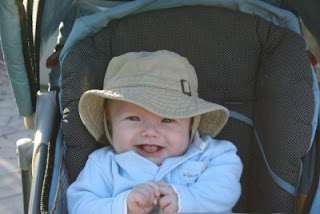 Griffin, ready for a Safari! OK, maybe just a walk! 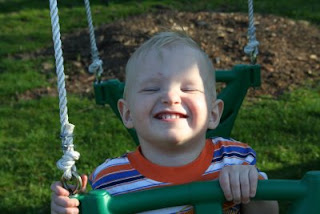 Maxim is a big boy on his swing! (Always posing) 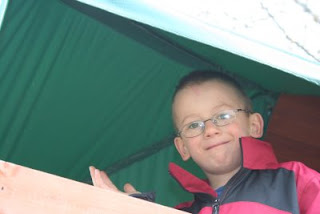 Austin is cleaning his clubhouse, getting ready for Summer!

Only in Buffalo!
I love the city I live in. Where else can you ski one day than swim in the pool the next? This week it was 40, 60 and YES 80 DEGREES! It rained, it pored and almost felt like it would snow at one point, only to wake up and want to turn on the Air Conditioner! Only in Buffalo!
Last Tuesday David and I feeling adventurous, took the kids to Chuck E Cheese for the first time. It was early so we thought it wouldn't be crowded and we could keep a close eye on the boys. In the beginning, life was good. The crowd was small and we drew minimal attention with our approaching brood. We where alone so Austin played quietly with his brothers in the toddler area. They went up and down the slide and played with the baby video games and electronic rides. The whole time Griffin slept in his car seat. It seemed instantaneous that when we sat to eat our pizza, the flood gates opened. People where everywhere. Austin had gone to play some video games so I decided to take Max and go find him, leaving David with Alex, Emerson and sleeping Griffin. I located Austin quickly and used the rest of the tokens we had. When we tried to redeem the tickets it seemed that every employee disappeared. God forbid you leave Chuck E Cheese without your penny candy and cheap plastic snakes you spend $50 for! As we waited I could see David's face dropping. He had Emerson, Alex and Griffin and they where all screaming. The whole time Max was trying to escape my grasp. Meanwhile, I had several people come up to me and ask me the standard questions..."Are they triplets?", "Are they identical?", "Are they all yours?", "You had another one?", "Are they all boys?", "How do you do it?"....etc... The whole time I'm just wanting to grab the kids and bolt! As we where getting the kids coats on David ran to the rest room and I was there with 5 screaming kids (at this point, Austin was wailing because I wouldn't allow him to eat his cotton candy in the middle of 4 little boys throwing a temper tantrum!)We finally left after the longest 2 hours of our life. The moral of my story...2 adults 5 small kids and Chuck E Cheese, a recipe for disaster!
Starting Thursday the weather was beautiful here. Everyday was spent outside. We started putting the kids toys back out. Washing all the large plastic items was a chore but well worth it. When we reassembled the house and mini slide the babies where thrilled. They are completely different than last year. They actually listen which is wonderful. I can say "put down the rock" or "go get your bike" and they actually do it. If you say "do you want to swing?" they say, yes! They run like crazy but are contained. I can't wait until we get the recycled tires at the base of the large swing set since they are slowly gravitating towards the larger slide and swings! Hopefully as soon as the weather stabilizes we can get it installed. Austin is enjoying the weather. I think he will be ready to get his training wheels off his bike soon. He is showing signs of stabilizing himself better. Griffin is Mr. Easy! He is happy to hang out in the shade in his stroller. He watches his brothers play and he is starting to play with his little toys so at one point I had 5 boys intensely playing.
Our strollers have arrived! This is a blessing beyond belief. I love these strollers. First of all, all 4 little boys are contained. They can have a snack or drink, lay back and relax or listen to Mp3's. That's right, they have built in speakers. We just hook up our Zoons(Mp3 players) and they instantly have piped in music. Not only that, but they are so easy to push and we are much less conspicuous! Most people don't even think we are together! We have walked and walked. The kids where leery at first but quickly have learned to love their lush new rides! I can't wait for the first fair or event! Let Summer begin! We're ready!
On a personal note I would like to say Happy Birthday to my husband. He is an amazing husband and father, everything one should be. Loving, caring, never judgemental, never critical! We had a wonderful evening out just him, I and Griffin. Thank you for all you do for us, we love you!
Posted by Stinner at 7:11 PM